First of all – we are doing great and are acclimatising pretty well. We have been living at our advanced base camp at 5,550m since 12th April.

We were very excited to be back in Kathmandu, and like always we were pretty busy preparing for our expedition during our two days in the Nepalese capital. We had to check our air cargo, pack our gear that we had left at the agency, do our last minute shopping….

We had already made arrangements to meet Miss Elizabeth Hawley for lunch and we were relieved to see that she was still in good shape. She seems very well and it is amazing to see that she is still 100 percent on top of things despite her 85 years of age. Like always, she wanted to know every single detail about our plans, how many people were joining our expedition and how long we would be gone.

On 4 April, we finally got on our way and headed towards the Tibetan border by bus. We are both very happy that we are only a two-man (or woman) team this year and the only other person who will be with us is Sitaram, our cook who has been working with us for many years. The border controls at Zangmu were pretty strict, which was probably due to the fact that we were one of the first foreign groups who were crossing the border this season. At 5pm Chinese time (5.45 hours ahead of GMT) we set foot into Tibet. It was also nice to see the young liaison officer, who has been at the border for many years. Three Spanish mountaineers (Jesus, Pedro and Alfredo) as well as Rolf Eberhardt and Andreas Sippel, who will be climbing the normal route via the North Col, entered Tibet with us.

The next day we continued by jeep to Nyalam and we were amazed to see that the road was completely sealed, and instead of taking 3.5 hours over bad roads with countless potholes, the trip only took around 1.5 hours!!

In Nyalam (3,700m) we met our old friend Tashi, who has been the middleman between the Chinese authorities and foreign mountaineers for many years. We had just arrived in time for the opening of his new hotel and we were invited to join his celebration featuring traditional Tibetan dancing and a big bonfire.

For our first acclimatisation walk we hiked up a 4,500m hill just behind Nyalam. From there we had an amazing view of the mountains of the Gaurishanker and Jugal Himal ranges, which are south-east of Shisha Pangma. For better acclimatisation we spent another night in this small village before we continued (on a sealed road!!) over the 5,050m-high Lalung Lee Pass to Tingri. As the air was unseasonably dry this spring, we caught a spectacular view of the North Ridge of Shisha Pangma.

Tingri, which lies at an altitude of 4,200m, has grown into a big village over the past few years, and it took some time to get used to the continuous barking of the dogs during the night. It is increasingly obvious how Tibetan and Chinese cultures and lifestyles have merged over the past few years. Tibetans talking on their mobile phones while riding their motorbikes are no longer a rare sight! And instead of using the traditional bamboo tubes for making butter tea, the Tibetans are now using electrical blenders. You see, Tibet is also catching up with modern times.

On our way to base camp we visited Zombuk, another Tibetan village featuring many of the typical flat-roofed houses. A friend of ours gave us some money for a school she had set up in the village, which we handed over there and then. The school has four small classrooms, where one single Chinese teacher is currently teaching 35 pupils. Without the initiative of this female mountaineer from Munich together with the Austrian non-governmental organisation ‘Eco Himal’, illiteracy would probably be much more of a problem in this region than it is now. 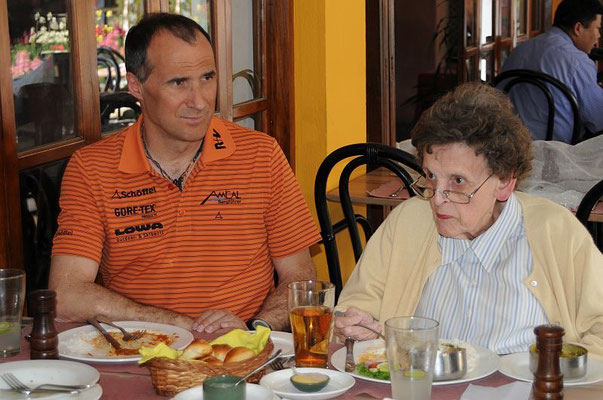 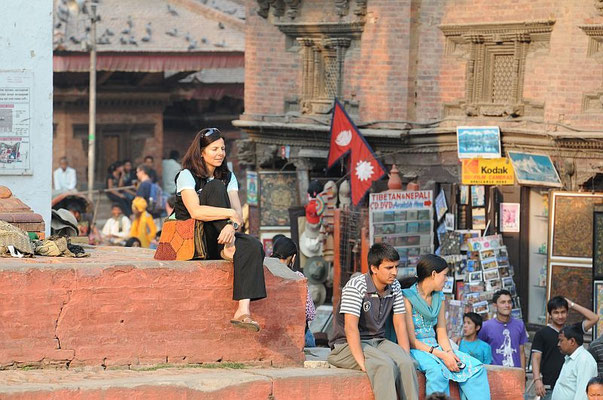 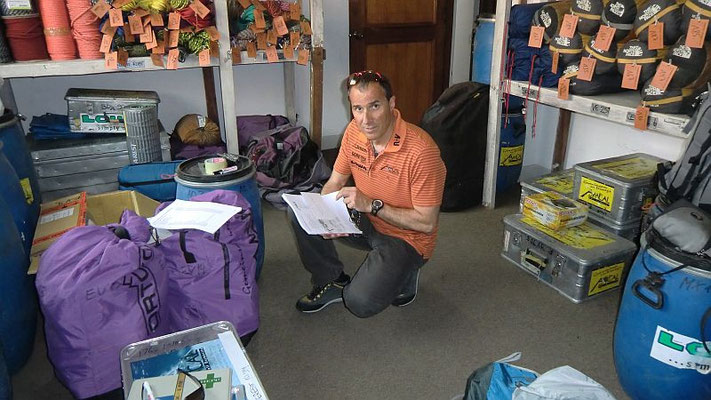 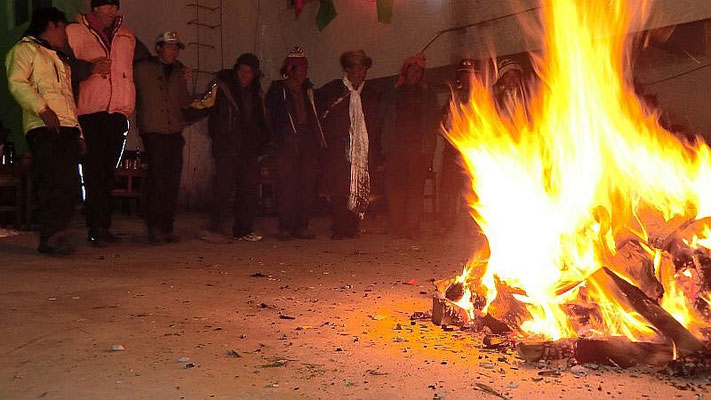 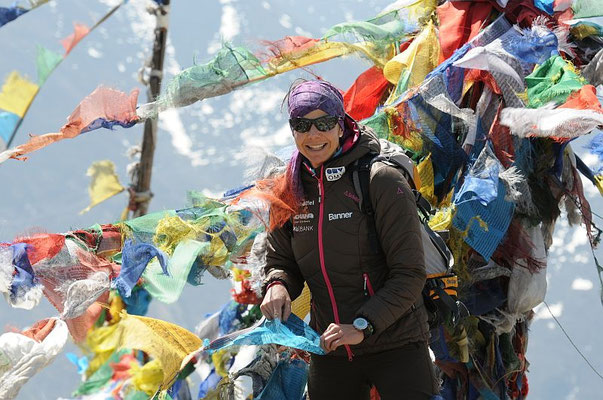 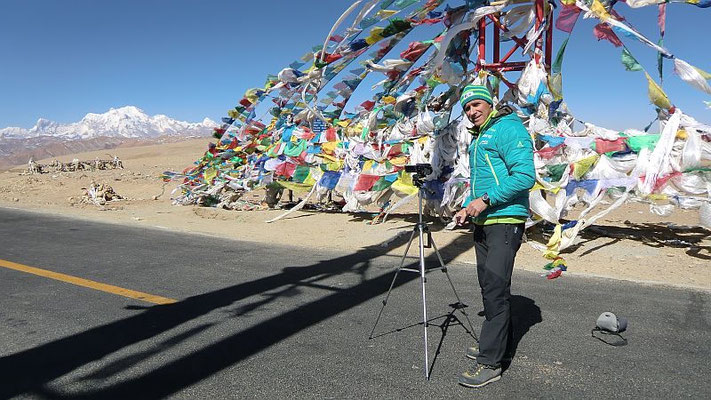 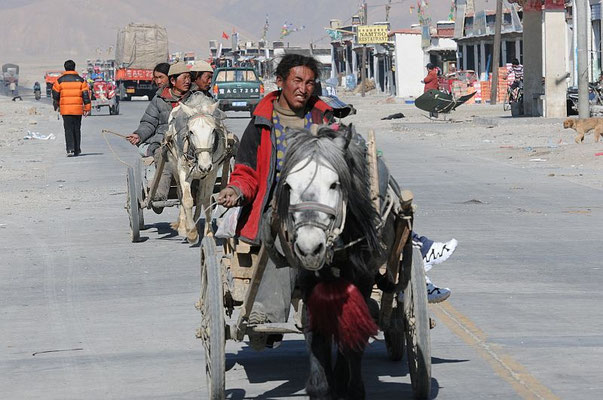 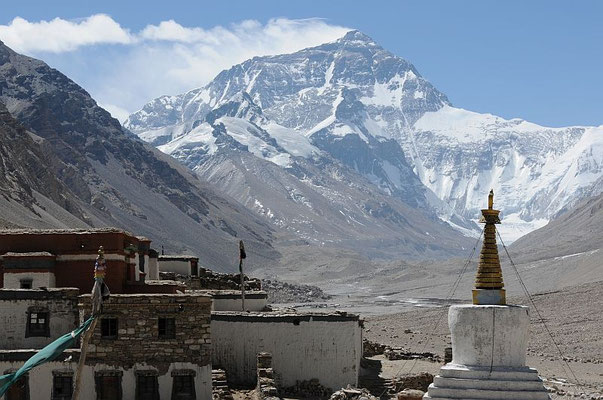 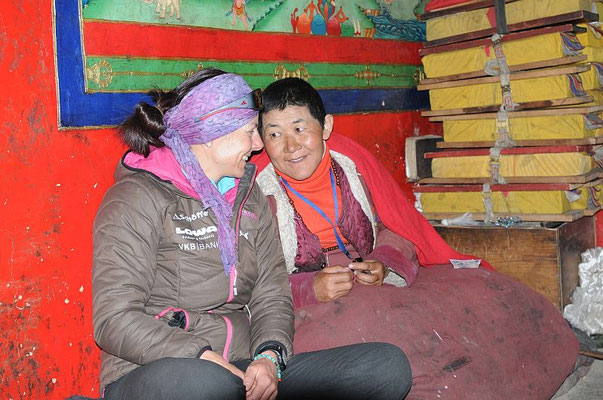 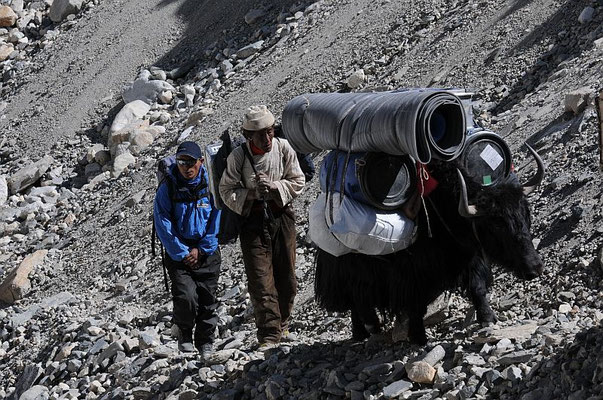 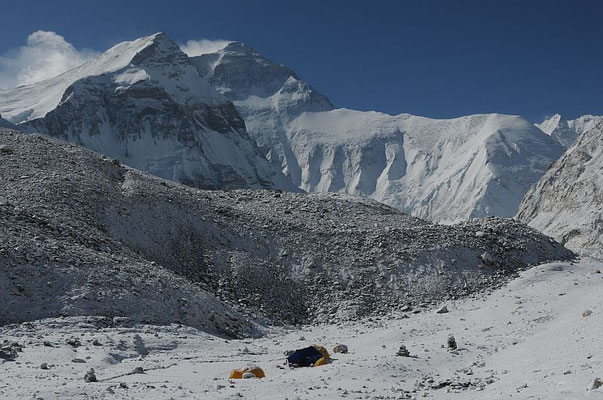 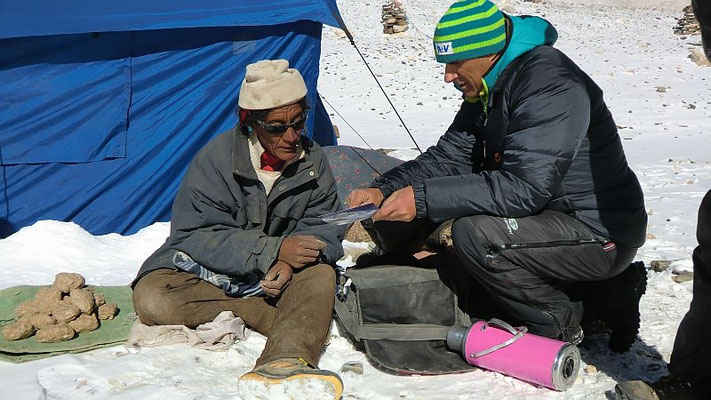 The last one-and-a-half hours we drove along the dirt road to the so-called Chinese Base Camp at 5,200m, which is dominated by the impressive North Face of Mount Everest. Just looking at this almost 3,000m-high imposing rock face nearly makes your heart sink. This year, there were a lot less expeditions camped on the site, which is about as big as two football fields, than in 2005, when we attempted Everest with our friend Hirotaka. There was a big welcome and many international ‘hellos’ as we bumped into old friends from all over the world.

On our second day at base camp we visited the Rongbuk Monastery, where we celebrated our first Puja (an auspicious Buddhist ceremony) for our Everest expedition.

In the afternoon, the Chinese liaison officer came with three helpers and our Yakpa as well as eight Yaks. The whole luggage and food for the next six weeks was weighed and distributed to the Yaks.

The way up the scree slopes of the central Rongbuk glacier was pretty slow and not many mountaineers normally come up this way. Our admiration for the Yak herders and their patience was unlimited as they kept on singing and whistling despite having to manage these stroppy animals up the hill.

Just before dark we reached the little dip in the slope that we already know so well from our last expedition. We had finally reached our base camp at 5,550m! As it was already getting cold, we quickly set up the kitchen tent and our small bivouc tent. One of our Yakpas brought a canister filled with water, which he collected from the glacier, which is probably a 20-minute-walk away from our site. Sitaram made a pot of noodle soup but it did not take long until we were tucked up in our sleeping bags falling asleep – but not for long as a massive thunderstorm woke us up in the middle of the night.
The next day, our yak herder left us with their wild animals, which were covered in snow and all of a sudden it was very quiet. Only three of us left and I have to say we quite like it!

Over the past two days we have settled down in our new home and have made it as cosy as possible. This morning, the brother of one of Sitaram’s friends came for a visit and he will keep him company for the next few days. He is not our only visitor though – six members of a Himalayan snowgoose family are coming to see us on a daily basis. We have not yet seen the blue sheep that came to visit us in 2005, however, it could be a bit too early in the year. Last night, temperatures were down to minus 10 degrees at 5,550m, so we cannot wait for spring to arrive soon.

We are planning to touch the foot of the North Face of Everest for the first time on 17 April. From there we want to have a closer look at our goal and give our bodies a better chance to acclimatise.

For today, we would like to send you our warm regards from our temporary home at Everest North Face Base Camp!