As expected, the ascent to the foot of the North Face was rather difficult and long. We left our advanced base camp on 18 April, a day later than originally planned. The reason for the delay was that our cook, Sitaram, had a bad stomach ache and Ralf accompanied him down to the Chinese Base Camp to get some treatment. I was holding the fort together with our snow geese. A very helpful Mexican doctor treated Sitaram and after about half a day, he already felt good enough to return to our ABC, which made Gerlinde very happy.

The first hundred metres of the patch from base camp were marked with some old, pretty unstable cairns, which are from Alberto Iñurategi’s autumn expedition. As we were running out of cairns after these first 100 metres, we decided to build new ones every 50 metres. With about 15kg on our backs, building these little ‘stonemen’ was quite a strenuous job. However, it is certainly worth it as we will most probably move up and down the central Rongbuk Glacier several times and these cairns will make route finding a lot easier. 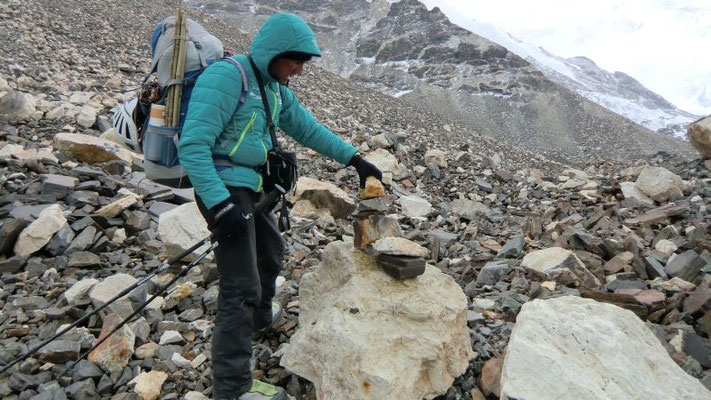 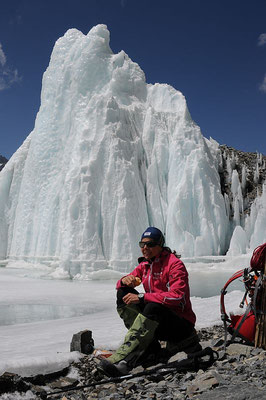 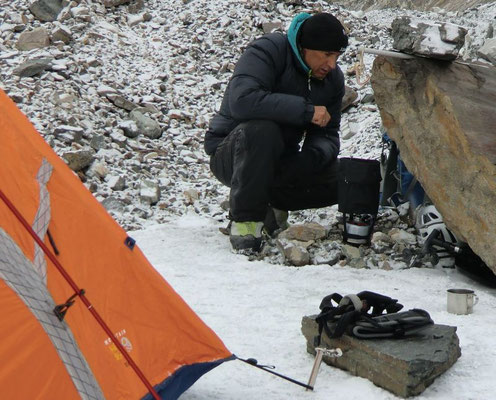 In the afternoon, clouds moved in and it started to snow a bit. Visibility was almost zero and we decided to spend our first night on the last moraine hill.

The next day was sunny, and we roped up and climbed via the pretty flat but heavily crevassed glacier to the foot of the face at 6,200m. Due to the dry winter, the crevasses are uncovered and easy to spot, however, some of them are hidden by a thin but treacherous snow cover.

After five years we were back, standing directly under the huge North Face of Everest. Of course, we were both thinking the same: Will we make it this time? We were constantly looking for the best line to climb the face and both of us stopped at the obvious entry to the face. But how will we be able to overcome the huge Bergschrund? We both knew that we would be back he next day to have a closer look at the 400m-long “gap” between the glacier and the steep ice of the North Face. 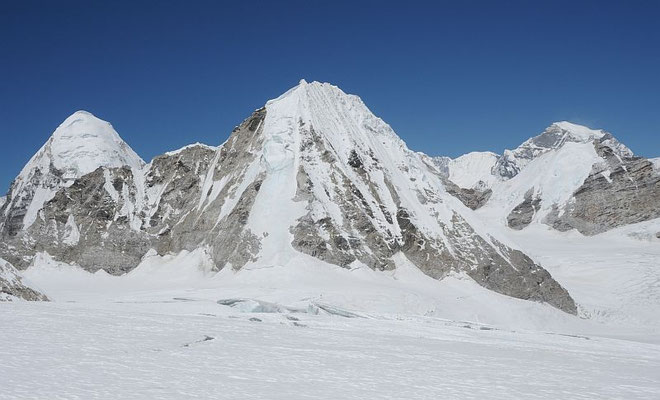 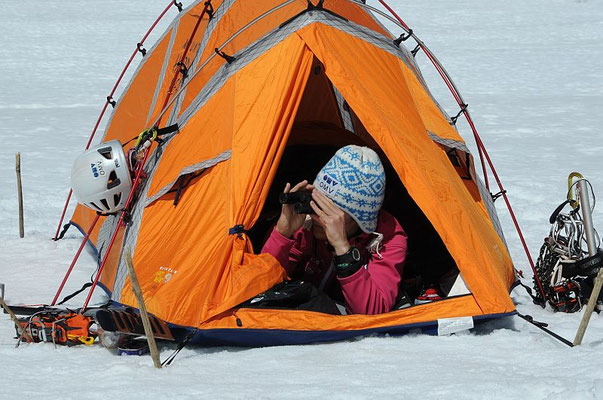 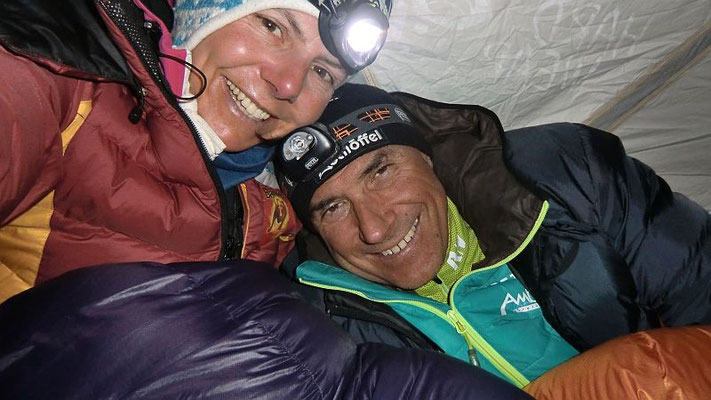 We then pitched our small tent and fixed it with ice screws to the ground. Charly Gabl, our old friend and meteorologist from Innsbruck in Austria, forecast 60km/h winds. Melting our usual five litres of liquid intake took hours, however, it was early in the day and we were more interested in checking out the face so that boiling water was just done on the side.

As soon as darkness engulfed out tent we were tucked up nicely in our sleeping bags. Apart from the howling winds, we could hear the occasional fall of a serac. Far away from any civilisation we lay in our warm sleeping bags feeling content and full of hope for the following day.

After breakfast we headed towards the foot of the face, where found a rather precarious but possible snow-bridge on the right side of the Bergschrund. It was pretty fragile but definitely possible…..

However, we still wanted to make sure that there was no better entry to the face. On the very left side of the Bergschrund, there were a few metres where the gap was only a few metres wide – and it would certainly be possible to cross the Bergschrund there. We were keen to climb at least the first pitch of the face, just to feel the consistency of the ice. This involved making a huge step towards the face, digging the ice tools into it and immediately placing an ice screw. Gazing into the 40m-deep precipice between the face and the glacier was certainly a humbling experience. 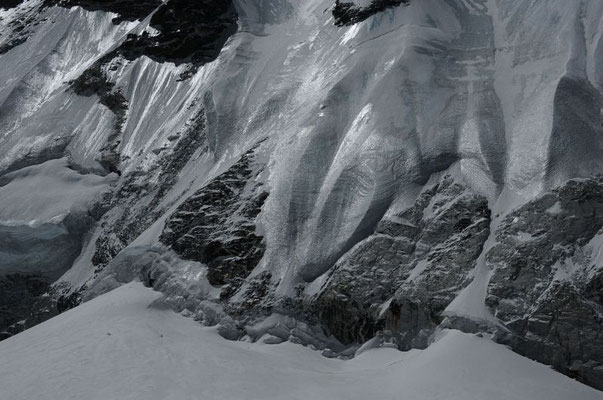 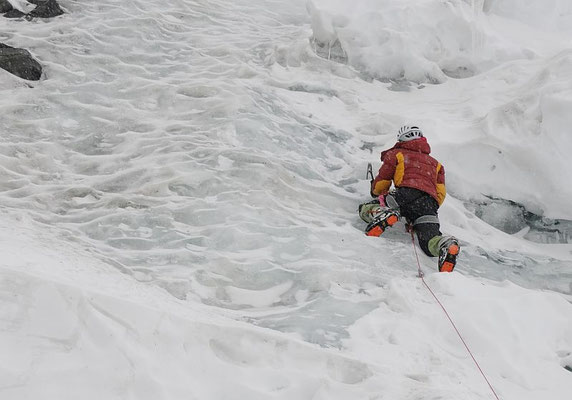 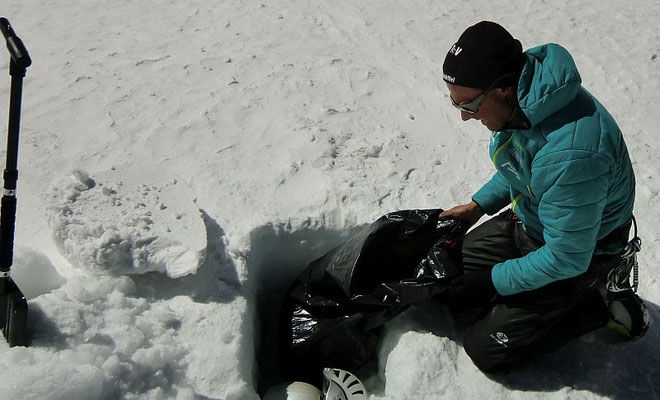 After this first move, we climbed a few metres vertically. The 20cm thick snow cover was pretty loose and not really attached to the ice, which meant that placing the ice tools was rather difficult. After that vertical bit the territory flattened out a bit, however, the ice was very hard, which made placing the ice screws rather difficult. Ralf said that we had just tickled Mount Everest at its bottom. Well, at least something. 🙂

We slowly returned to our tent as a storm was approaching, and all of a sudden our tiny tent became the most magic island in the world. Like most of the times, Charly was right – the storm was so strong that we were worried for our tent to be blown away. The storm kept us up almost the whole night, which gave us a lot of time to exchange our thoughts about the face.

The positive thing is that there is hardly any rock or serac fall, which is probably due to the cold temperatures. Ralf, however, is very worried about spending too much time to place additional belays in the hard, almost continuous ice and the bivouacs, which we have not quite worked out yet. Gerlinde, on the other hand, is positive about the possible sites for bivouacs, which are still not obvious. During our acclimatisation tour to the North Col we will certainly see more with our binoculars.

The winds were still pretty strong the following day. We took our tent down and, together with our sleeping bags and mats, put it into an ice hole. We placed two more marking poles and descended to our base camp, where Sitaram and Tashi were waiting. We were happy about every single cairn we had placed and agreed that we had found and marked a very good path. 🙂

On our way down to base camp we could not help thinking about vegetable rice, polenta and fresh carrots and radish. Upon our arrival at base camp, we were happy to get out of our heavy expedition boots and enjoy a nice cup of tea with cardamom, which is one of Sitaram’s specialties.

We will now rest one day at base camp before we embark on our next acclimatisation tour. We are planning to climb to the North Col via the old ‘Odell Route”, spend one night up there and, if possible, climb a bit further than the North Col.

We will be in touch again after this acclimatisation trip. Up until then we are sending you warm regards from our sunny and wind-protected ditch, which is our base camp.