At about 10pm on 1 May, we arrived back at our base camp in the pitch dark. After a long descent from an altitude of 7,600m, Sitaram and Tashi greeted us at about one hour outside base camp with some mango juice. After they served us noodle soup at base camp we fell asleep quickly, feeling very well acclimatised.

We started our second acclimatisation phase on 26 May. On that day we went to the foot of the North Face, where we dug out our gear and spent a good but very windy night. Regarding the conditions of the face, we could not see any difference at all.

The next morning, we roped up and climbed towards the North Col. Our route took us over a heavily crevassed glacier and we had to walk underneath two big threatening seracs that were hanging from the south face of Changtse. By midday, it had completely clouded over and a heavy storm was blowing on the North Col. We decided to pitch our tent in a protected crevasses at about 300m below the North Col. The next day, we had to cross a Bergschrund before we were able to ascend the last 300 metres to reach the North Col at 7,100m. As we were moving on blank ice we stayed roped up and while we were on the third pitch, a big rock hit my ice axe…..phew, that was lucky! Ralf shouted up to me whether I was ok and other than having shaky knees, I was actually alright!!! I guess that one of the many climbers had loosened a rock on the North Col. We continued up the snow flank before we moved back onto blank ice. Even though the territory was not steep, I guess about 45 degrees, we stayed roped up and climbed in a shared lead as we were worried that more stones could be falling down. Like almost every day, the winds had picked up and it had started snowing again. Ralf was not wearing enough layers and had got very cold. When we reached the North Col, we pitched out small tent and started to boil water. We drank a lot, and even though we were not really hungry we forced a piece of dry bread, cheese and soup down our throats. We were in for a frosty night, and Ralf was sneezing and blowing his nose every half an hour but we were hoping that he would be better the next day. He kept on drinking hot water, even through the night. In the morning, we woke up and both our sleeping bags and the ceiling of the tent were covered in thick ice. Fortunately, the sun hit our tent as early as 5.30am and we were able to dry our equipment. Ralf felt better and we could continue our climb. We made good progress and we were both going at our own speed. While Ralf was busy taking pictures and filming, I was keen to get on and find a good camping spot as it was clear that it would cloud over again in the early afternoon….

At an altitude of 7,600m I found a good place, which did not need much work to build a platform. I simply had to move a few big rocks, put some snow on them and the platform was made. When I was pitching our tent, I was glad that we always climb with this tiny tent even though it gets a bit crowded at times. However, the fact that it was pitched in no time made me forget that it can get quite crowded for two people. I collected some ice and fired up the stove when Ralf arrived. He was very happy to be able to get into the tent immediately as he had very cold hands from taking pictures. We were glad that we had acclimatised so well and we were both hoping for the weather to hold! It was snowing heavily and the wind was blowing, and it continued all through the day. We abandoned our plan of climbing a few hundred metres further the next day. We stayed the whole day at 7,600m, boiled water, cooked food and refueled. 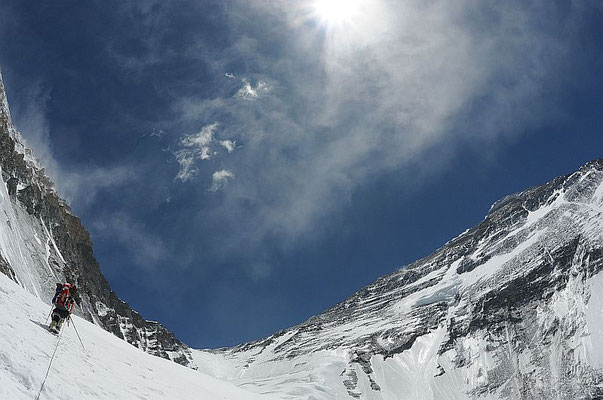 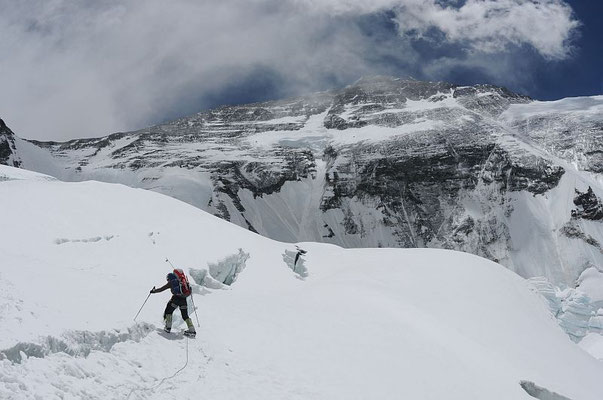 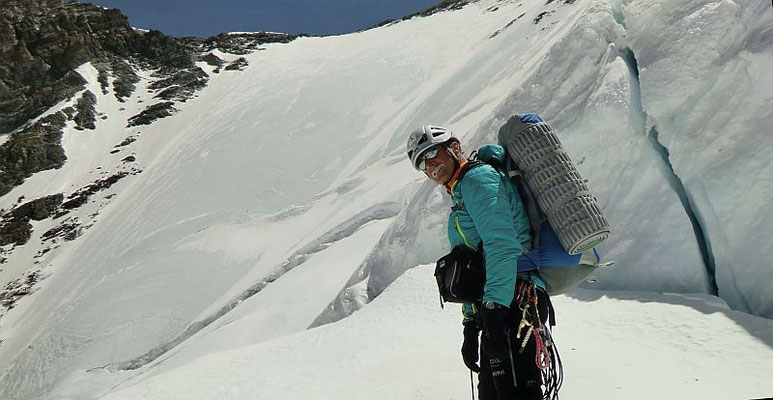 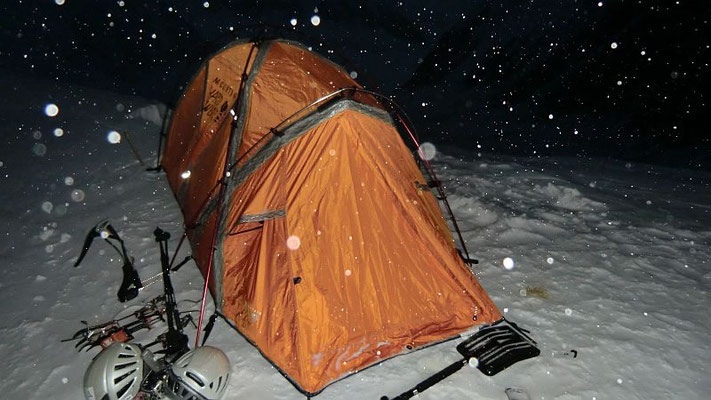 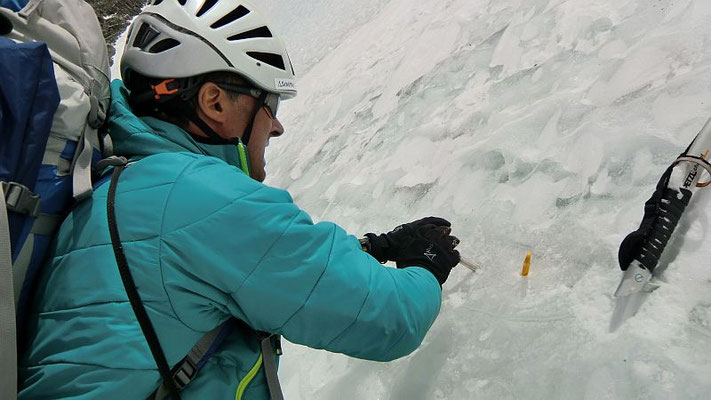 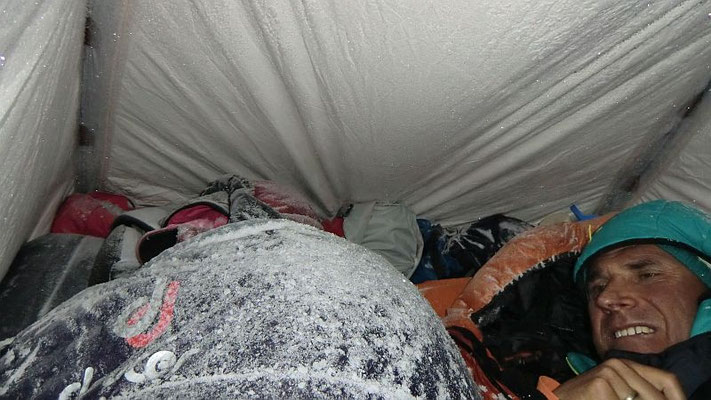 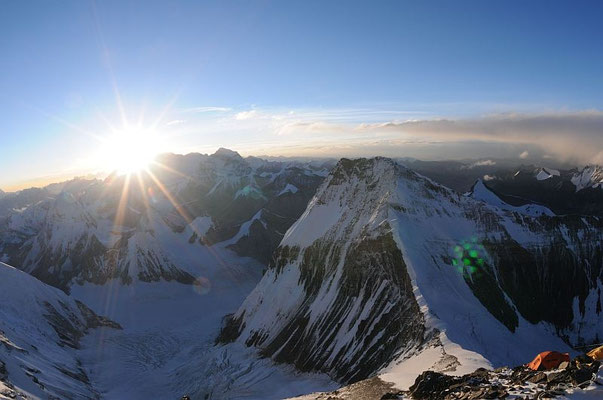 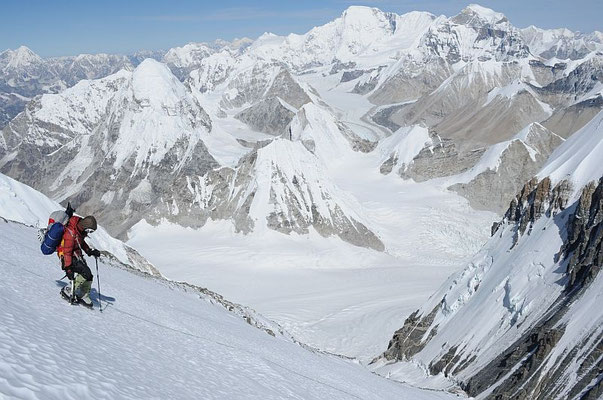 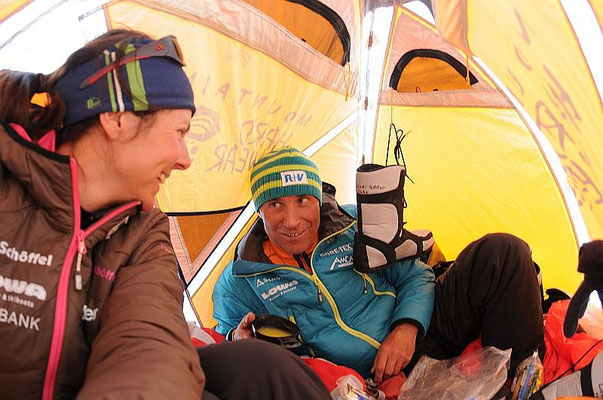 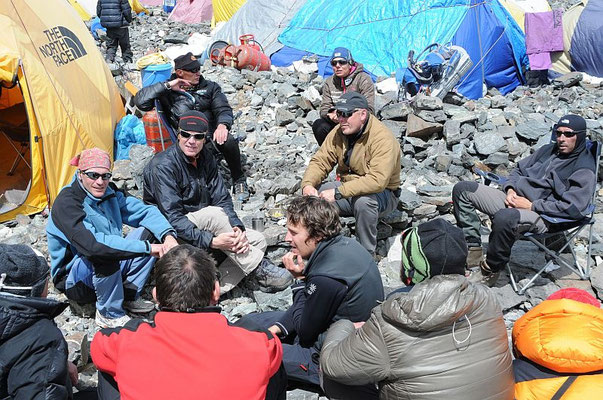 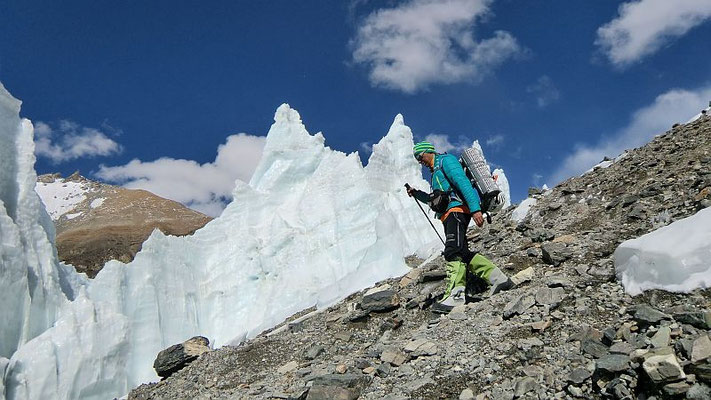 Whenever we saw a break in the cloud, we got out our binoculars to look for a suitable bivouac place on the North Face. However, we could not see much that day. In the afternoon, we rang Charly in Innsbruck and he confirmed the low temperatures. However, he predicted warmer days for the coming week. He also told me about the great success of our president, Dr Heinz Fischer, and that made me very happy!

We wanted to stay another night at this altitude as we are both convinced that two nights higher up are favourable, if not necessary, if you want to climb Everest without supplementary oxygen. This second night was very exhausting for both of us. Even though it had stopped snowing, it was still very windy and very cold. Neither of us was able to sleep, and I kept on listening to the wind, wondering whether our tent was fixed properly. Ralf kept on telling me that with both our weights inside the tent, it would be almost impossible for us to be blown away….however, I was still unable to sleep.

Early the next morning, we packed up our gear and descended to the North Col. It was amazing as there was not a breath of wind there!! We were able to dry our things and create a small depot for a gas canister, a bit of food and a rope. We decided not to descend via our ascending route as it was clear that it would be prone to avalanches and rock fall. We took the longer but safer descent route to the Chinese Base Camp, where we met some of our friends. We bumped into Rolf, Andreas, the three Spaniards as well as Gnaro, Abele and Michelle. After a short break we continued around Changtse to our base camp. We had just finished a very long descent and both felt were tired, but content. In the meantime, Joachim Rienhardt had arrived and he will stay with us for a few days. As expected, the blue sheep from 2005 had also come back, which means that our team is now complete. 🙂

Over the next few days, we will try and rest and follow Charly Gabl’s weather forecast intensively. The temperatures are still too low (at the moment around -35° Celsius on the summit) to attempt Mount Everest without using supplementary oxygen. We keep on observing the North Face and hope that on our next push, we will be able to get to the summit via this impressive route.

I would like to say goodbye for today, and I am sending you many warm regards from base camp!