It has been 14 days since we posted our last newsletter; 14 days of bad, or rather very bad weather. On 11th May, our friend and remarkable meteorologist Charly Gabl wrote: Wind on Top: WED: W 140 km/h, THUR: W 135 km/h, FR: WSW 110 km/h. Our base camp was actually quite exposed to the high winds and our kitchen tent was almost blown away by the strong gusts of wind a couple of times. At the advanced base camp (ABC) on the normal route of Mount Everest, numerous tents were destroyed and we heard that mess tents containing heavy solar systems were flying through the air.

However, the wind died down a bit in the last couple of days and Gerlinde and I walked over to the North Face to have another look. We wanted to refresh our acclimatisation and we wanted see what the ice on the North Face would be like after all these bad weather days.

On the approach march, Gerlinde almost disappeared twice in crevasses, which were covered up by the snow. The layer of new snow, which was about 10 to 15cm thick, had been dispersed by the wind and it was almost impossible to see even the big crevasses.

But after about 5 hours we reached our small depot on the glacier plateau, just below the North Face. Charly was also right regarding the temperatures on the mountain. He wrote in his email of 14th May: On Saturday, temperatures on the summit could be as low as -35 °C. According to the long-term forecast, temperatures will be about -29 °C on 22nd May, however, tendency is rising.

It was a very cold night; at sunset temperatures were already as low as -15°C, but we were very happy when the sun hit our tiny tent the next morning (16th May). We quickly packed our rucksacks and walked towards the North Face. The Bergschrund was very different from a couple of weeks ago. A snow bridge now covered the huge crevasse, which is about 40m deep, and a gap of about 30cm offered the only way to reach the vertical ice. The conditions were certainly better and safer than last time – the huge ice serac, which was looming above the route, had also broken off making the ascent a lot safer.

However, four ice screws later I had reached the upper edge of the ice fall and then something bad happened: while I was standing there, with both ice tools dug in the unsafe snow, a spin drift avalanche (see photo) came down. I could hardly breath, my hands that were grabbing onto the ice tools became numb and I could no longer see or feel my feet, which were still holding onto the vertical ice. Finally, the spindrift eased off and I was able to move onto flatter territory. However, it did not take long for the next spindrift to come down and Gerlinde, who was coming up behind me, looked like a snowman when she came over the edge. Cheers! We continued for a few pitches, before we abseiled back down again. 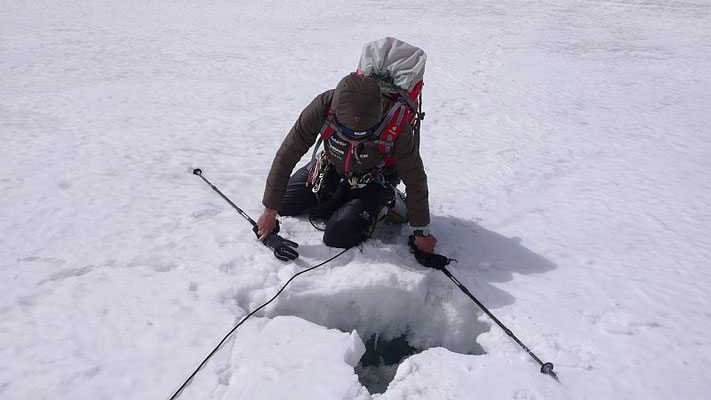 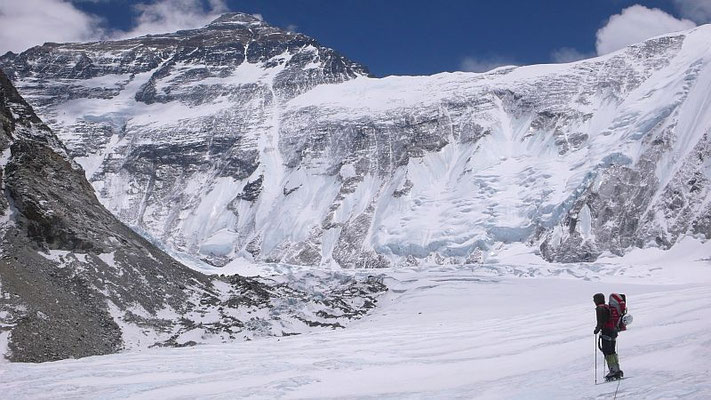 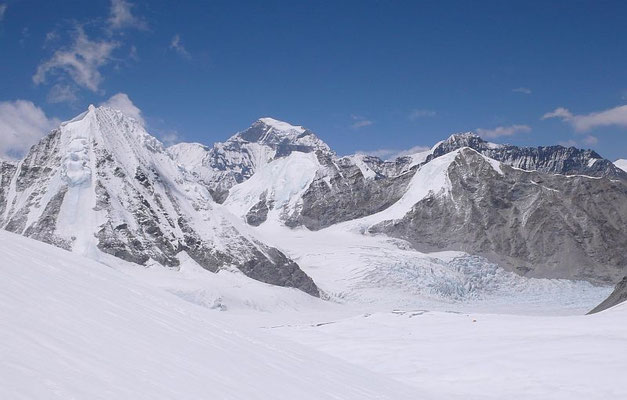 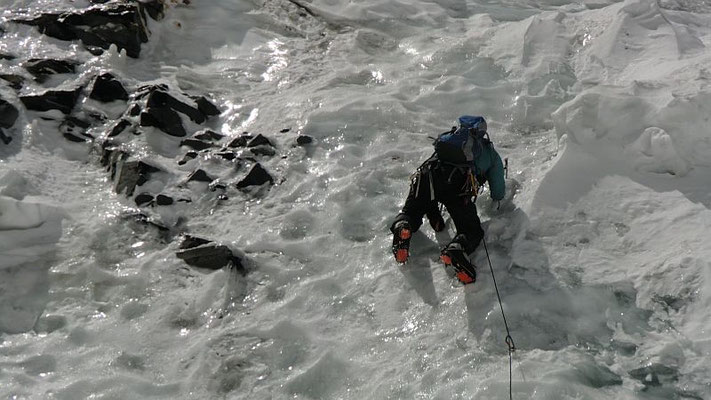 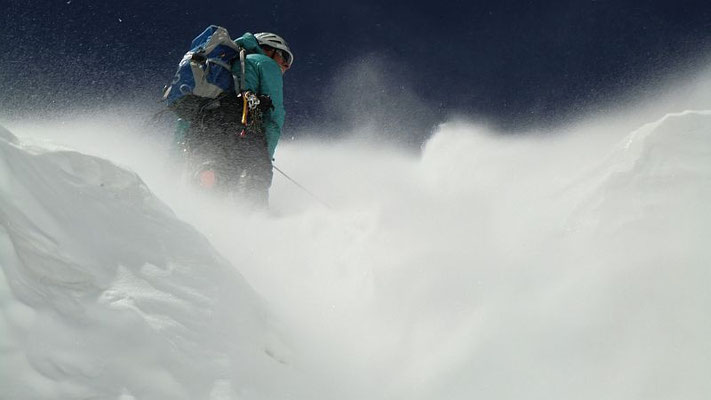 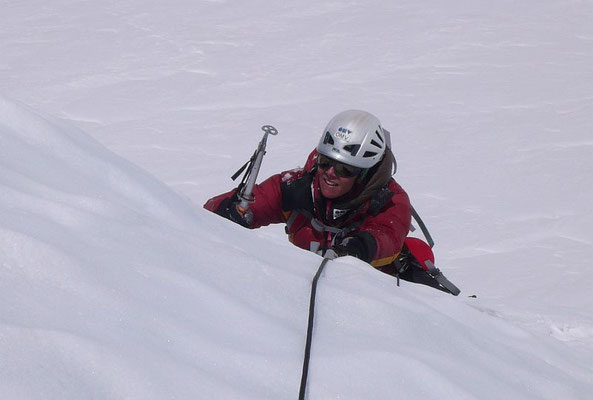 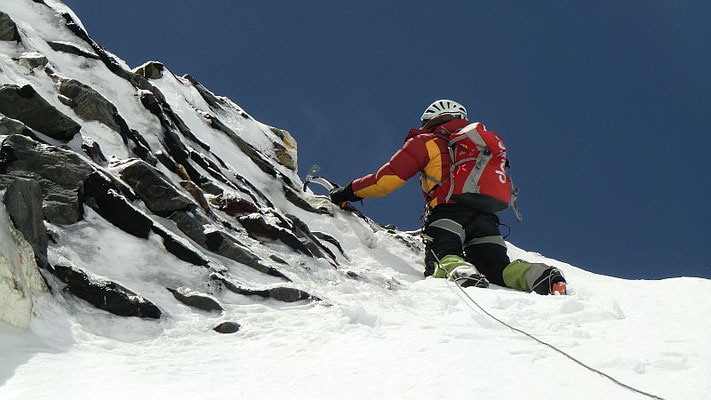 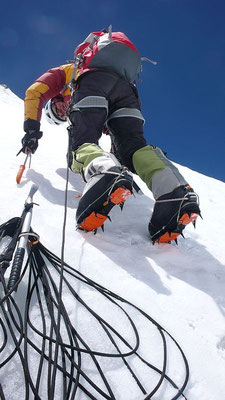 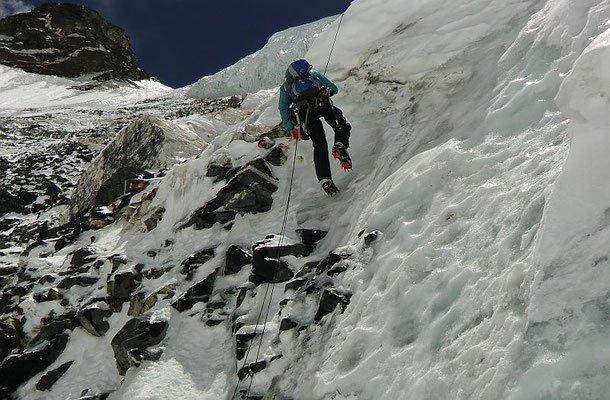 When we got back to base camp in the evening, we had to make a decision and had a discussion on what to do next: Gerlinde wanted to climb the North Face in its current conditions once the weather improves. I felt completely different: the new snow cover has not really consolidated with the blank ice, which means we would have to belay each other most of the way, which would take a lot of time. This again would mean that we would have to find more bivouac places, which are not really available and cutting plateaus into the ice uses up a lot of strength and energy. Recovering properly would also be difficult as we would be very squashed on these tiny sites. And, it is pretty unlikely that we will get a weather window of more than three days. The slightest gust of wind could turn the snow in the Japanese Couloir into a spindrift avalanche, which would slow us down significantly and would be more dangerous.

For me, climbing the North Face in these conditions is out of the question, so I asked Gerlinde whether she would join me in climbing the Odell route to 7,200m and from there onto the NE ridge, which is still a great challenge, especially when climbing without oxygen. And the likelihood to reach base camp safe and sound is certainly much higher.

I simply have to accept that I am no longer as brave as I was when I was younger. But maybe I just see the risks and dangers more clearly after so many years of experience. Or I have just seen too many deaths during my years of climbing. Or it is a combination of the above stated facts that stop me climbing the North Face. Whatever it may be, Gerlinde has agreed to follow my intuition and do without climbing the North Face, for which we have trained so hard for such a long time.

Charly forecast a lull in the wind after 22nd May, which might be our time to finally push for the summit.

Warm regards from our lonely base camp