Sorry for not having been in touch for a while but a few things have happened since we posted the last newsletter a few weeks ago. Finally, on 19th June, we left our advanced base camp and went for the summit. Up until the last minute we did not know whether we should try for the 23rd or 24th May as Charly had told us that due to the strong jet stream, predicting the weather accurately had been extremely difficult this year.

On 19th June, we said goodbye to our cook and climbed to the bottom of the face at 6,200m. The night was very windy but bearable enough to continue through the heavily crevassed Odell Route to the North Col at 7,000m the following day. The wind was so strong that we were worried it would blow us both away. We actually had to belay each other even on the flatter parts of the climb as the strong wind kept on throwing us out of balance every once in a while. It is hard to believe now that I am writing this in surroundings that are completely obsolete of wind.

We spent two nights at the North Col. We had consulted Charly and he had advised us to wait for a while as the coming days were looking extremely windy, which would have made our oxygen-less ascent very difficult, if not impossible. The extra day at the North Col was good for both of us as it gave us the opportunity to recover from the cold and the lack of fluids of the previous day.

The 22nd May was a beautiful day with almost no wind. We packed up our gear and climbed to 7,600m and we ended up almost at the same spot where we had camped on our acclimatisation trip. The evening sky looked amazing and we had an astonishing view into Tibet. These are the moments when I know why I love high altitude climbing so much.

I dug a tent platform, which proved to be rather uneven. Ralf did not sleep a wink but I guess part of the reason was also his bad cough. On 23rd May, we, and many other climbers, continued up to C3 at 8,300m. Clouds had moved in and it had started to snow. Ralf and I pitched our tent at the right edge of the camp and we tried to dig a better platform this time in order to have a better night’s sleep. Our stoves (we had two this time) were running non-stop and we both managed to drink about 3 litres of fluids. But despite the high fluid intake, Ralf continued to cough. At 7pm, when we were tucked up in our sleeping bags, we saw a thunderstorm, which was raging far away and it started to snow more heavily. I tried to relax and to concentrate on our summit push. I noticed that Ralf was restless and kept on sitting up during the night to cough and get rid of the phlegm in his throat.

At 1.30am we fired up the stoves as we had planned to leave at 3am. We had prepared everything the night before and the only thing we had to do was have breakfast. Baby porridge and biscuits, which had been reduced to crumbs, were in a plastic bag right beside me. We both drank a big mug of milky coffee with honey and apple juice concentrate, ate porridge and biscuits, filled our water bottles and got ready to go. However, Ralf was very tired as he had not slept properly for two nights and while we were having our breakfast he kept on falling asleep. When he dropped his mug including its contents for the second time, he said: “Gerlinde, I can’t go with you, I am too tired. If I keep on falling asleep on my way to the summit….it would be too risky. You have to go without me.” And he was right, it would have been too dangerous. I needed a moment to reshuffle my thoughts. Going without Ralf…it was his big wish to summit Mount Everest without supplementary oxygen and now I should go without him? We agreed that he would descend to the North Col and wait for me there.

At 3.40am, I put on my boots and crampons, checked all my gear, said goodbye to Ralf and left the tent feeling a bit sad. It was 3.55am, it was pitch dark and it was snowing quite heavily. Fortunately I had looked at the route the previous day, which really helped me in the dark but it was still difficult to find my orientation. Every once in a while I could see footprints in the light of my head torch. The climbers, who were in front of me, must have started a fair bit earlier.

Until dawn I was solely concentrating on finding the route and I did not notice anything around me. Once I had reached the ridge it finally got light, however, I could still not see a lot as it was still snowing.

At the first step I met two Italians, Abele and Marco, who were also climbing without supplementary oxygen and without Sherpas. I also met Michelle and Silvio Mondinelli (an old friend of mine) on the 2nd Step and I was so happy to see them. We carried on together and we started to come across people coming down from the summit using oxygen. Some of them had started their climb at 9pm, others at around 11pm. After the 3rd Step the summit seemed to be in reach, however, it turned out to be wrong as it took us another two hours to reach the highest point. At 12.30pm we made the final steps to reach the top of the world – a moment which I cannot describe with words. I had no idea that I would feel so elated as I had always been dreaming about the North Face and not about the summit as such….

It was completely still, it snowed slightly and there was a light breeze. In my thoughts, I thanked all the people who are so dear to me. I thanked Ralf, my family and friends and all the people, who kept their fingers crossed, Goddess Mother of the Earth and our creation….

The four Italians and I were the only people on the summit at that particular moment. We had no views but due to the snowfall the temperature was bearable. I felt good and I tested my brain by giving myself three mathematical problems – everything seemed to be working well.

I looked towards the North Face and even though I could not see that much I was very happy not to have climbed it as it would not have worked out in these weather conditions. We stayed exactly 35 minutes on the summit, and before we started our descent, I put two small stones in my pocket, drank a few sips of water and ate a few pieces of dried pineapple. The five of us decided to stay together during the descent.

At about 8,600m the cloud cover opened and the snowfall eased off, however, it was replaced by a strong wind, which made the cold hardly bearable. However, when I saw our tent at 8,300m I forgot about the storm. Was Ralf waiting for me or did he leave the tent, just in case I needed it?

At about 50 vertical metres from our tent I saw Ralf walking towards me. He had waited for me!! I cannot tell you, how happy I was. This was another summit for me. The previous night, I had already admired Ralf for his strength to recognise his limits and to make the right decision without further ado. However, I am very grateful to him that he had waited for me at 8,300m the whole day and that he was so happy for me. 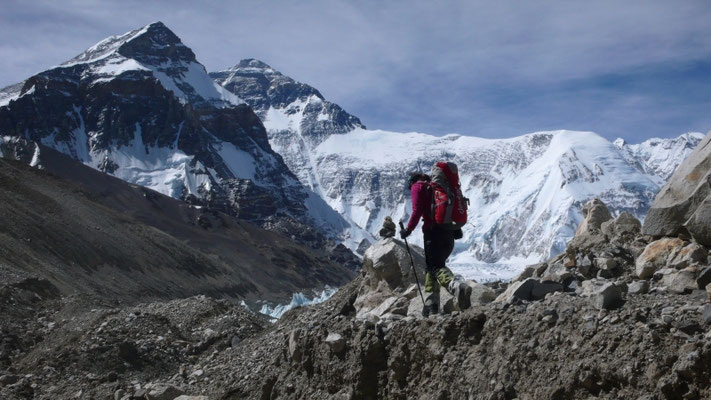 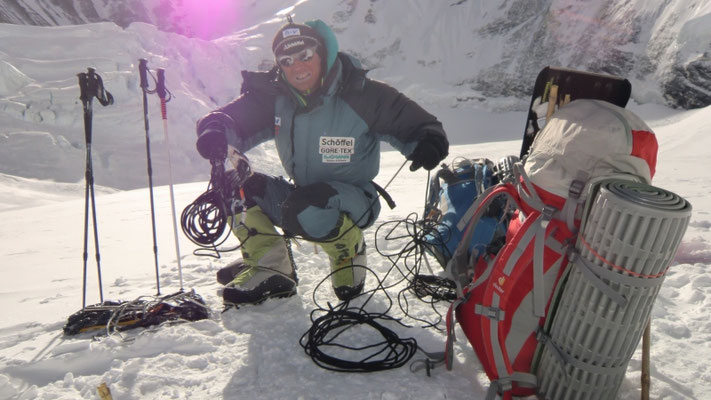 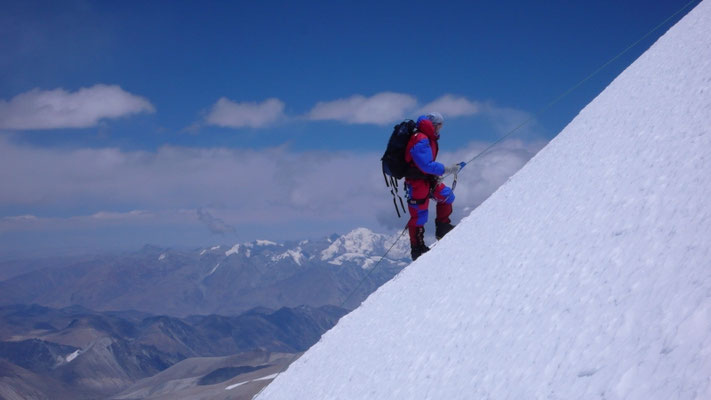 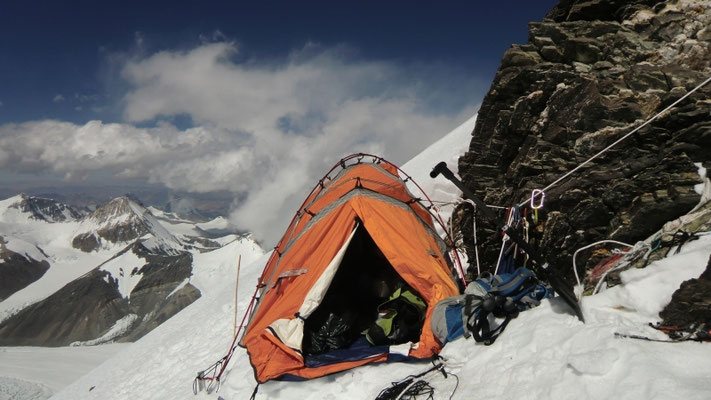 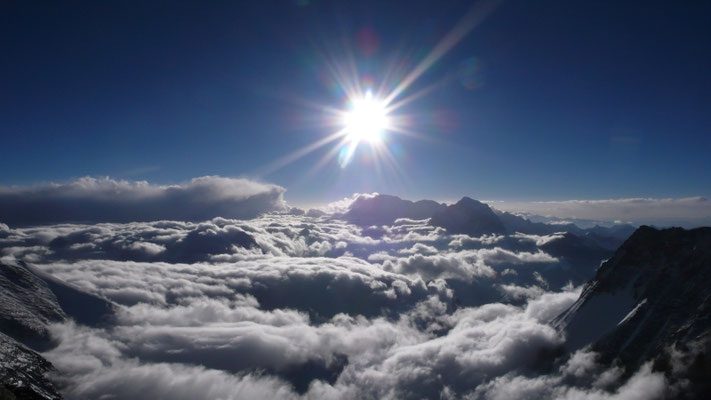 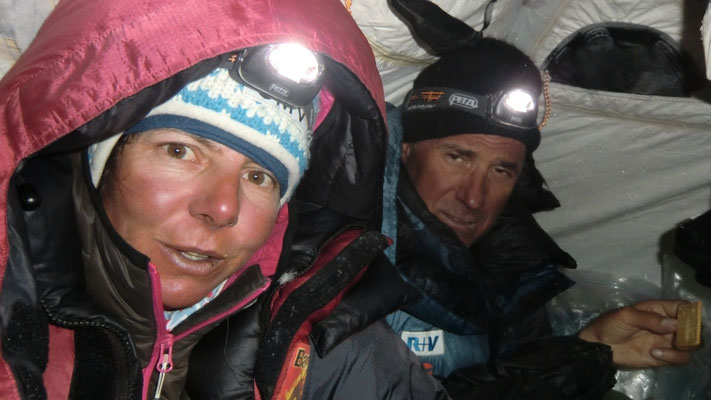 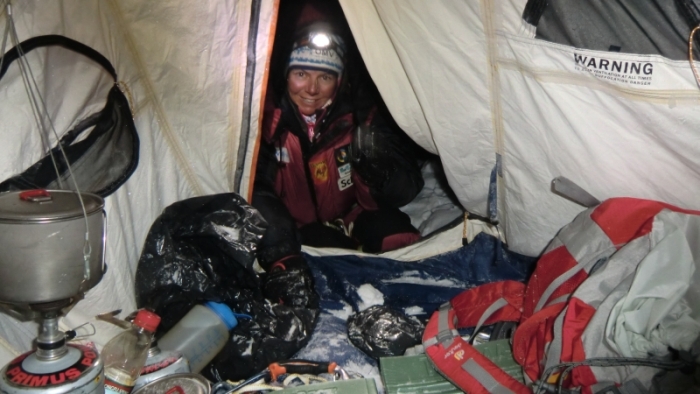 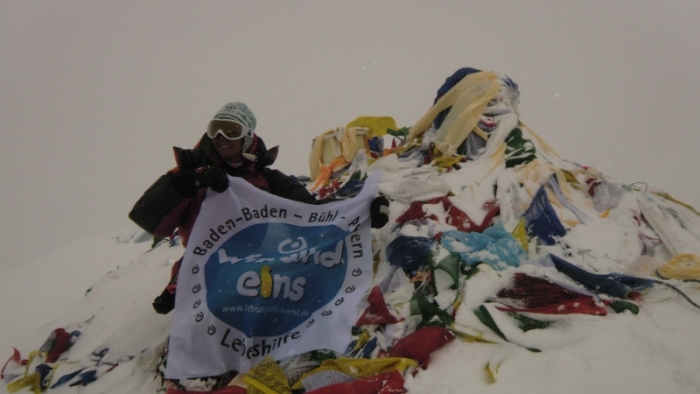 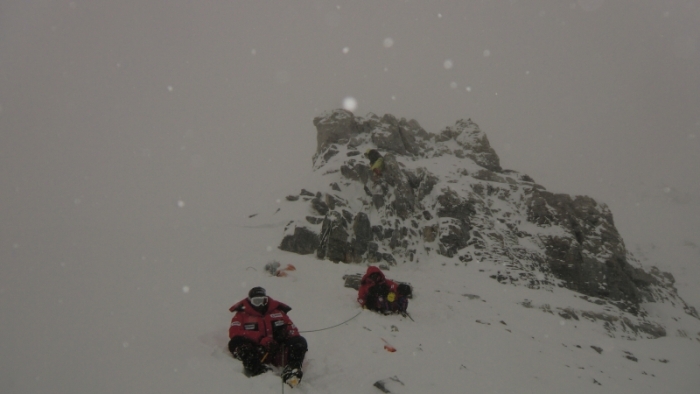 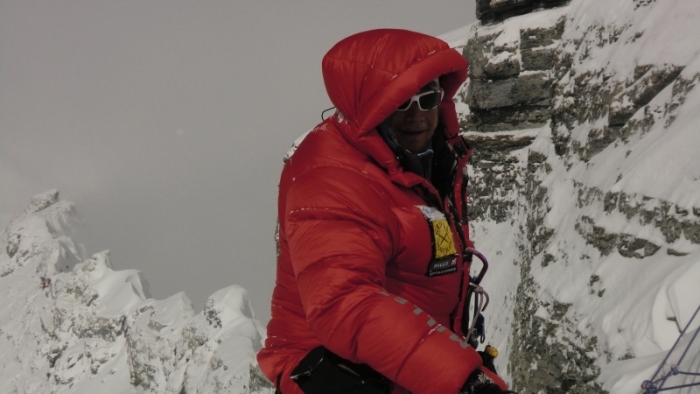 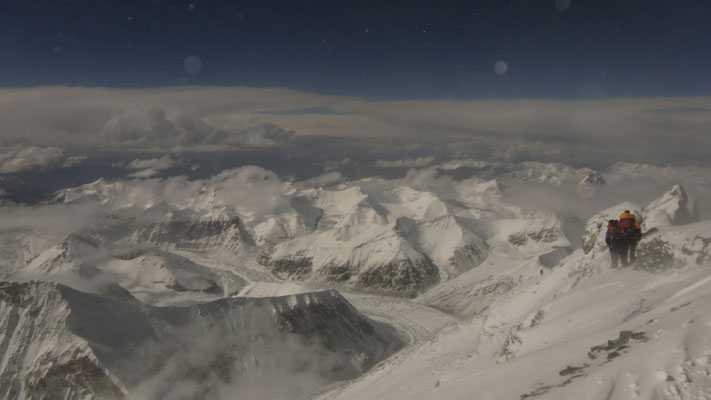 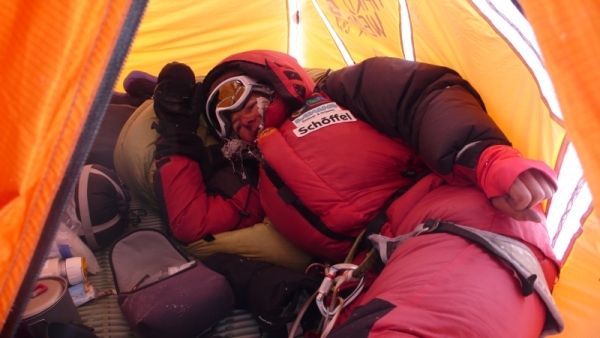 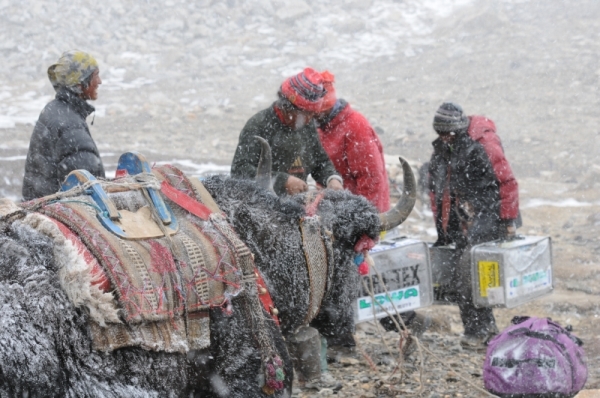 Ralf immediately rang Charly Gabl in Innsbruck as he had had been worried the whole day. I quickly warmed up in the tent, had some hot apple juice that Ralf had made and then we packed our gear and continued our descent. At 1am we reached our ABC completely knackered but also relieved and very happy. Our cook Sitaram made some soup for us and we could have had some pasta as well, however, I was already fast asleep by the time it was ready.

On 27th May, we arrived safe and sound in Kathmandu but I was very tired as we had not had time to relax and recuperate. The yaks had already been waiting when we got back to base camp (a day too early) and when we said goodbye to Everest, the mountain showed his most reluctant side by being engulfed in a very strong snowstorm, which was with us the whole day.

Now we are back in Germany and are enjoying the warmth and greenery at home. I would like to thank all those people, who kept their fingers crossed and who sent such positive messages all the way through the expedition. Thanks to Charly Gabl, who was with us during the whole time and was even ‘on call’ during the night before the summit push!!

Thanks to our team in the office, Kathrin Furtner and Nicola Roth and also a big THANK YOU to my partners and sponsors OMV, BANNER, VKB-Bank, SCHÖFFEL, LOWA, ÖKOfen, Adidas EYEWEAR, Deuter, Komperdell and Naturfreunde Österreich and Petzl!

I wish you all a wonderful and hopefully sunny sommer!

Warm Regards and once again THANK YOU so much!