We are finally back at K2 base camp. Ralf, our good friend Andreas, Angela and I arrived at the foot of this beautiful giant yesterday morning. After our arrival in Pakistan, we only spent one day in Islamabad. In temperatures of over 40 degrees we packed our gear, went to the expedition briefing of the Pakistani Alpine Club, and we even had enough time to have a look around the Bazaar of Rawalpindi. We were meandering through the market between cooking pots, clothes, fruit and vegetables. The atmosphere was peaceful and positive. 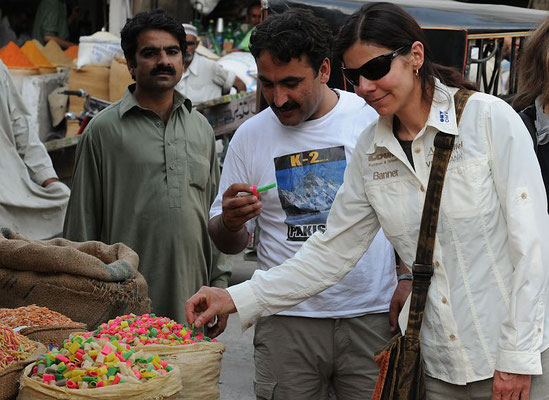 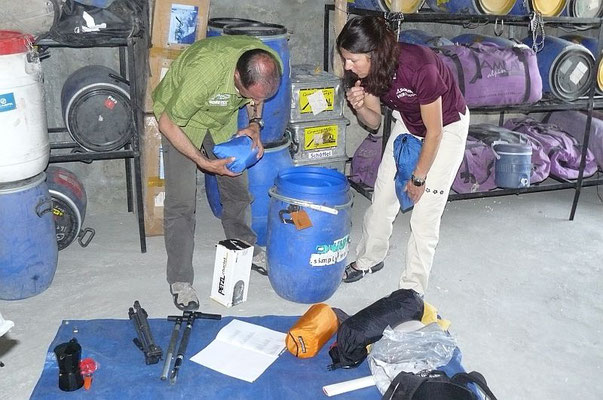 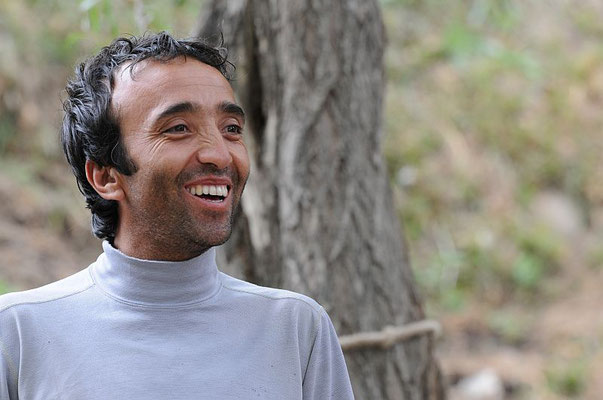 The following two days, we spent in a minivan driving 850km to the village of Skardu, which lies in the Northeast of Pakistan. It took us one day to pack our gear down to 25kg and run the last errands. We were very happy to see Ehsan, our cook from last year, and many other familiar faces. However, Skardu did not show its friendliest side this year as a violent storm hit the Skardu valley and the whole village was covered in a massive sand and dust cloud.

At 6am the next day, we boarded our jeep to Askole. For a second I remembered last year’s incident when our jeep tumbled down a precipice, however, I immediately pushed aside these negative thoughts. Hopefully – or In Shallah, as they say here – we would get to Askole without problems. And we did. The dirt road is in pretty good shape this season and our driver managed to get us to Askole, which lies at an altitude of 3,050m, without any mishaps. 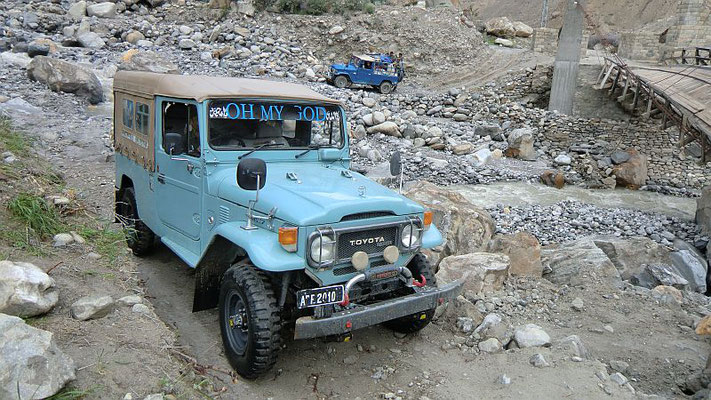 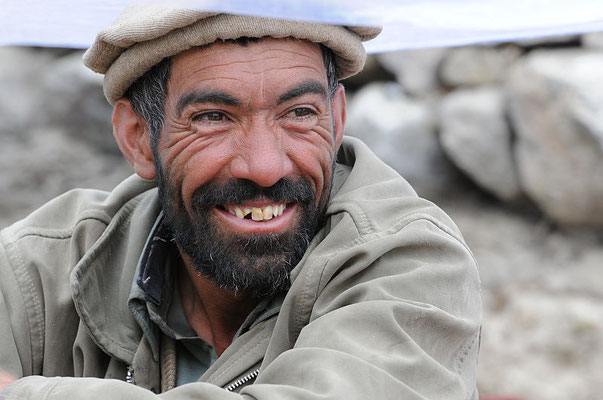 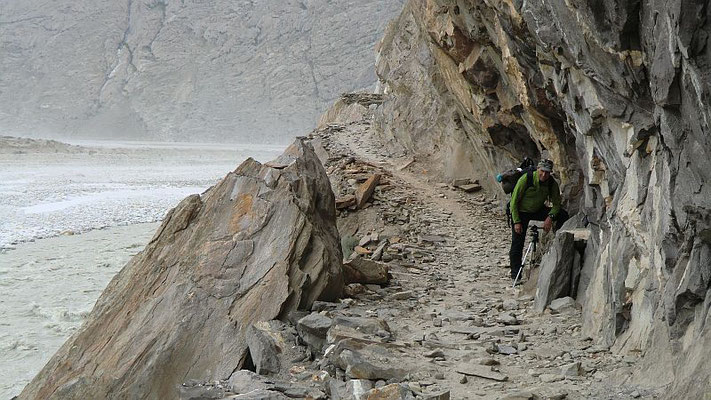 Once we got there we saw many porters looking for work, which could prove tricky this year as there are only 25 expeditions in the Karakorum, which is a rather unusual low number. Later in the evening we met a friend from Switzerland who is bound for Gasherbrum 2 and was also on her way to Concordia.

As soon as the loads had been distributed to the porters we started our trek towards Jhola, where we pitched our first camp on the walk-in. The next day we walked along the Braldo River to Paju. Here, at 3,400m, we enjoyed sitting in the shade of the gigantic trees as we knew that this would be the last day of greenery around us. The porters usually use this last rest day to relax, prepare Chapatis for the long days to the Baltoro Glacier and to distribute food among each other. I was especially looking forward to trekking to Urdukas. From a far distance we could already see the imposing “Nameless Tower”, the Trango Towers and the impressive “Cathedral”. We set up camp directly opposite these rock giants. 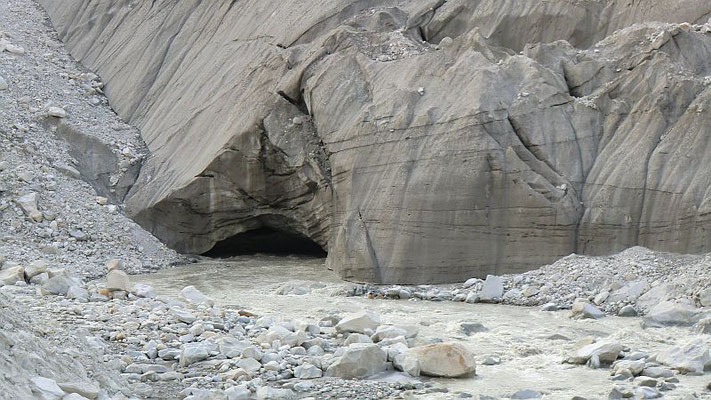 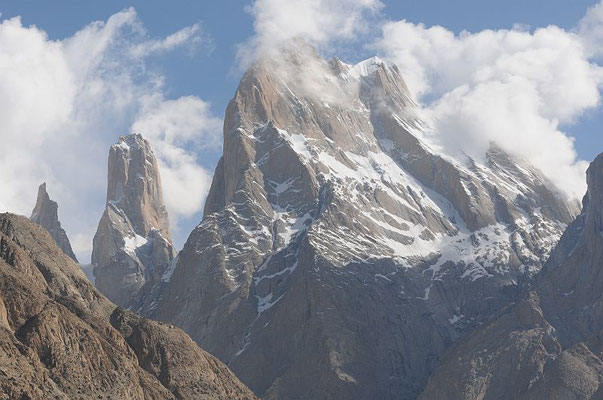 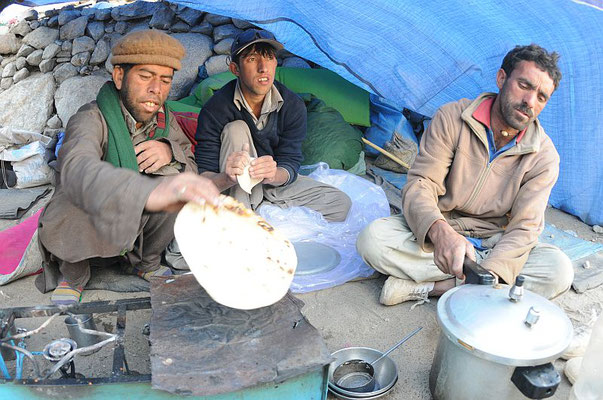 During the night, it started to rain and the next day we walked in fog and a light drizzle to Goro II, where we spent another night. The following day, our trek took us across Concordia, which was covered in deep snow, to the Spanish base camp of Broad Peak. This season has seen a lot of snow, which was particularly noticeable on the glacier, which is normally dry. In good weather, Concordia usually offers amazing views of the entire beauty of K2, Broad Peak and Gasherbrum IV, however, this time we were denied the first glimpse of our dream mountain.

In the afternoon, just before we arrived at our camp at the foot of Broad Peak, the cloud cover broke and the last 600m to the summit of K2 were revealed. When I saw the peak, I felt almost petrified and I could not stop looking at it for a few minutes. This mountain acts like a magnet to me, which is very unique and almost magic. All of a sudden, last year’s memories came up and I felt emotionally confused for a moment. 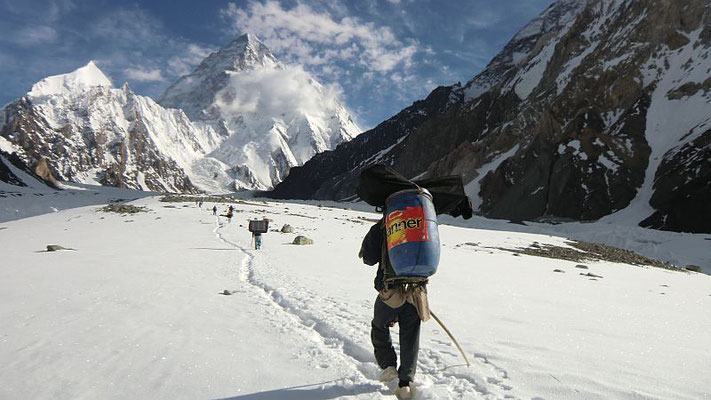 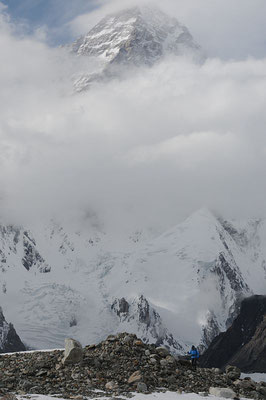 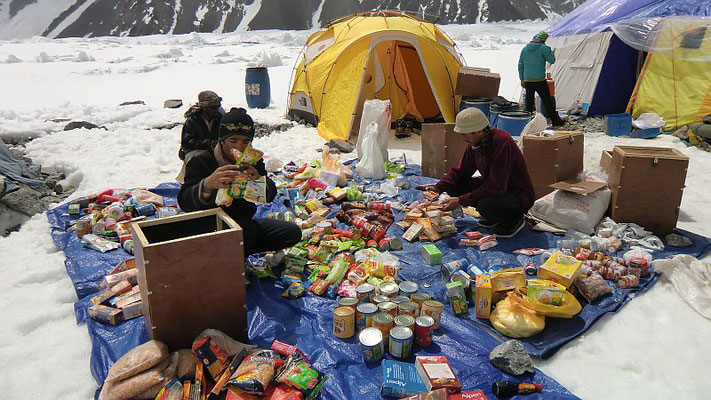 In brilliant sunshine we reached K2 base camp the next morning. As the many crevasses of the glacier were covered in snow, the trek was relatively easy. In order to make the most of the good path, our hard working porters were eager to get back after we paid them their salaries and tips. We are very happy to be back here.

Making platforms for our tents was almost effortless and it took us no time to set up our camp. We have spent a lot of time with our friends Angela and Andreas, but unfortunately they are leaving us tomorrow.

Ralf and I will start our first acclimatisation trip on the Cesen Route tomorrow. We are both very excited to find out what the mountain has in stock for us this year. There is also a Polish expedition and a Swede with his American friend, who are attempting the same route.

Anyway, I would like to say goodbye for now and we will certainly be in touch again after we get back from our first accilmatisation trip.

We are sending you warm regards from the Karakorum and we would like to thank you or your interest in our expedition.