The last few days have been pretty good. We spent four days at high altitude and we noticed to our surprise that our bodies were still acclimatised from our Everest expedition, which enabled us go high rather quickly.

On 8th July, we left our base camp (4,950m) carrying a stove, cooking gas and food for four days. We were actually supposed to leave a day earlier but my upset stomach was not ready to to face the climb.

We left base camp at 5am and walked over a frozen snow cover to reach the familiar start of the Cesen route. We made good progress through the gully at the bottom of the route and reached the first rock steps pretty quickly. A few members of the Polish expedition had spent the night at Camp I at 5,900m and greeted us warmly. We continued up the increasingly steep gully until we reached the 150m-long traverse underneath the couloirs that leads to Camp II at 6,300m. Under the surprisingly thin layer of snow we found some fixed ropes from last year’s expeditions, which had been complimented by some newer ropes from the Polish expedition. We decided not to use them and reached Camp II after about 6 ½ hours. When we got there we had to spend about

2 hours hacking into the 40cm-thick ice layer to make a platform for our tent. But once our mini tent was pitched and secured with firm anchors it became a little bit cozier: we relaxed, melted snow and enjoyed the amazing view of the surrounding mountains of the Karakorum. Unfortunately my comfortable down-filled thermarest gave up the ghost and it was all of a sudden ‘uncozy’ again. I was faced with spending a night lying on ice! 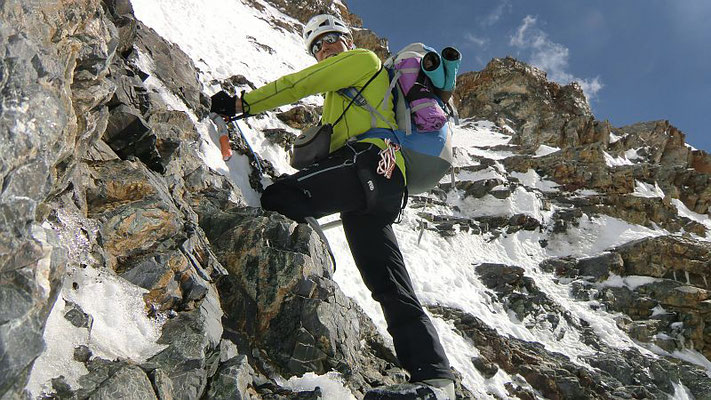 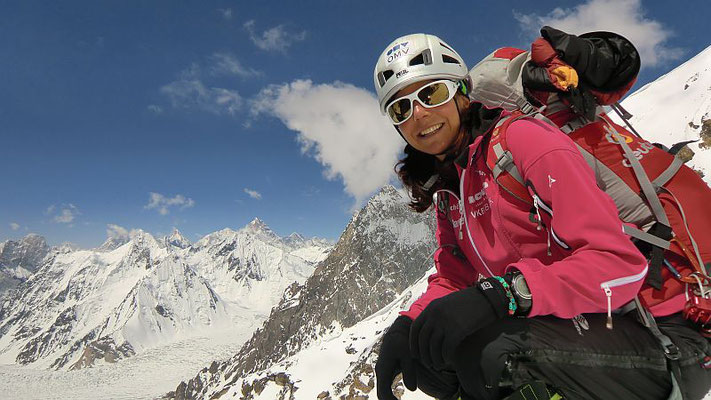 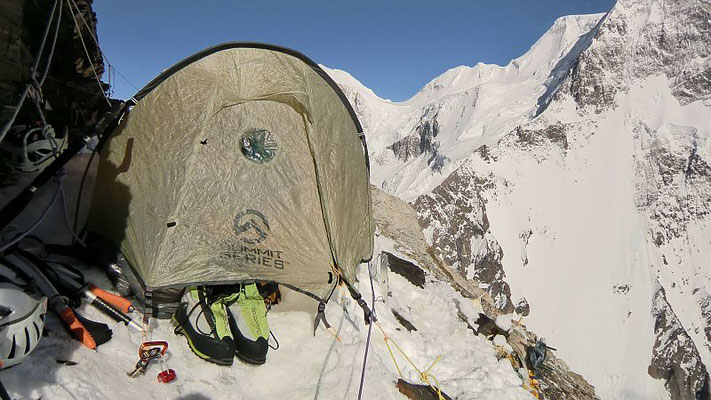 At 6.15am the sun hit our tent and warmed it up, however, as my stomach was still not quite right, we decided to have another rest day at Camp II, which was actually not bad from an acclimatisation point of view. Ralf spend some of the time digging out a rotten old tent that was covered by a layer of ice. He ended up finding a sleeping mat, which proved to be pretty good after we had given it a good clean. I was able to sleep more comfortably again!

On 10 July we continued up to 7,100m, a section of the climb that is very varied. The mountain is in much better condition than last year.

There may be a lot of snow at base camp this year, but compared to 2007 and 2009 there is a lot less snow above 6,000m, which is a great advantage for our expedition. Frederik from Sweden was also on his way up. Last year he had tried to ski down right of the Cesen route but had to abandon his attempt due to an accident. We fixed about 100m of rope just below Camp III when it started to snow and became windy. We quickly dug a small platform for our tent on a rock ledge at about 7,100m, a process that still took us about 1 ½ hours. 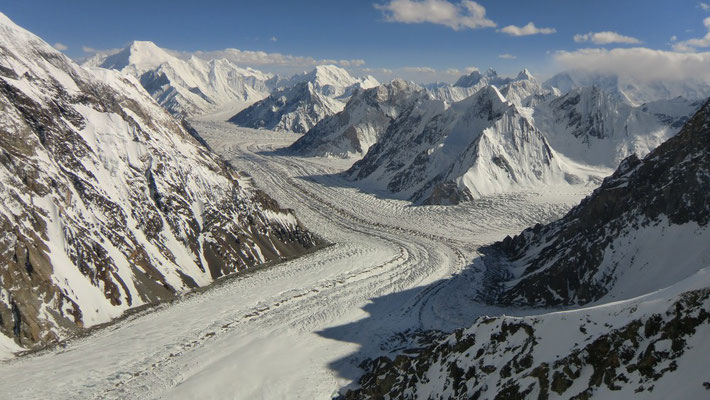 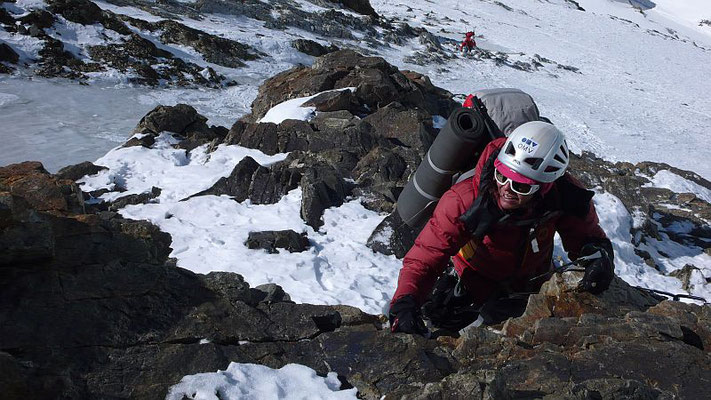 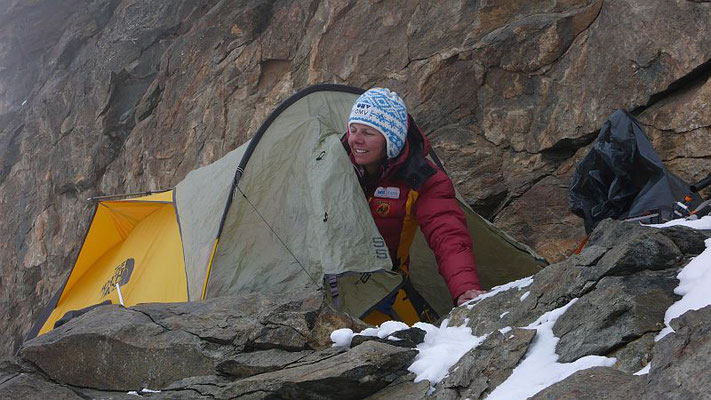 The next morning we were waiting for the sun, however, in vain. The cloud cover, which is typical for K2, engulfed us the whole day. As my stomach was still upset, I frequently had to go up and down the fixed rope to reach our toilet space. Ralf and Frederick used the time to look for a better bivouc space for our next push about 100m further up. They dug out two platforms at 7,200m and spend the rest of the day relaxing and acclimatising.

The following night we were woken up a strong storm and snowfall at 3am and a few hours later we had to pack our bags and descend in the freezing cold. Four hours later we reached base camp in heavy snow.

Ehsan, our amazing cook, had prepared lunch for us, which was a very welcome surprise as we had only had two dry biscuits and a cup of porridge ;-) for breakfast – and that was for both of us! 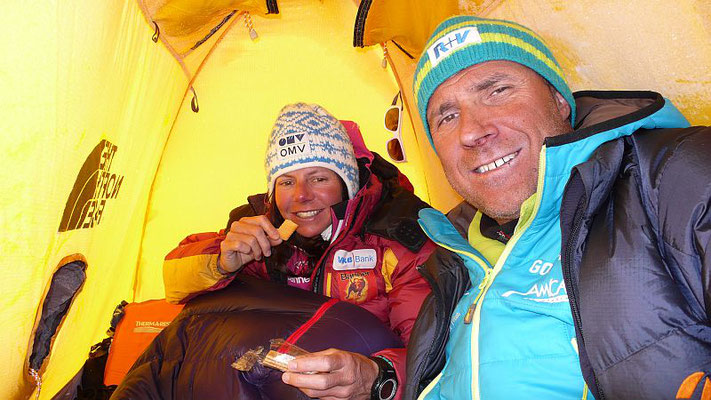 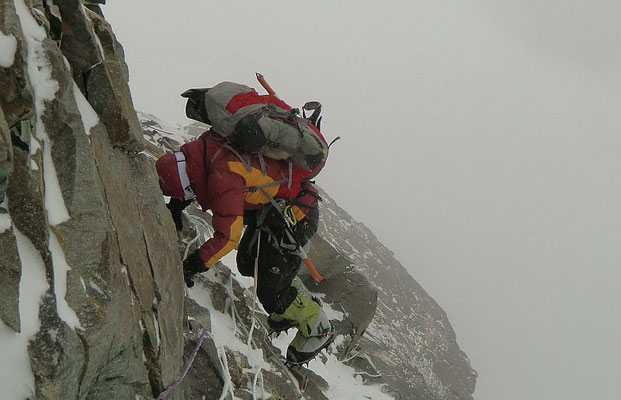 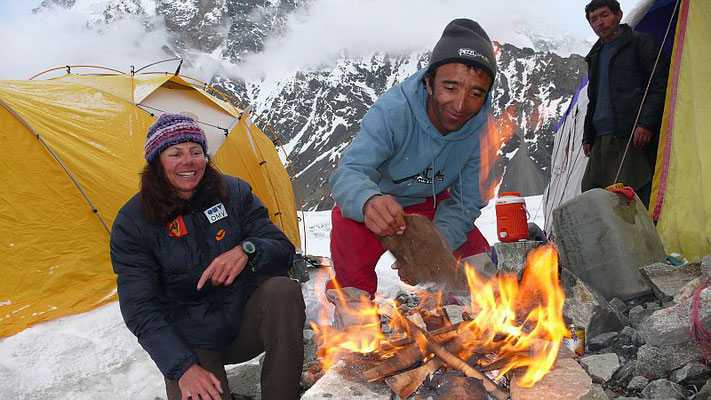 We have been back at base camp since and in the meantime we have received the latest weather forecast from our friend Charly Gabl in Innsbruck. It is supposed to stay relatively dry and there is a chance of a weather window coming up soon. We are very excited and we are hoping that we will make it this time. It would be a wonderful present to reach the summit together and we will do our best to fulfill that dream.

We will definitely be in touch again before we go for our first summit push. Until then, we are sending you warm regards from K2 base camp.