How many times have we said the following in our K2 Newsletter? „It was not meant to be“. Well, unfortunately we have to say the same again this year – at least regarding our first summit attempt.

Together with Frederik, his friend Trey, Fabrizzio and three Polish climbers, we left base camp feeling positive and determined on 24th July. Due to the snow that had fallen in the previous days, we had to break trail, which was not made easier by the strong winds. However, we still managed to reach our bivouac spot at 6,300m without any problems. 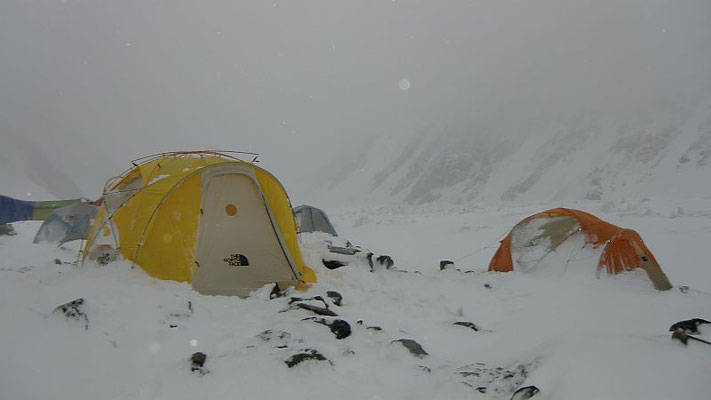 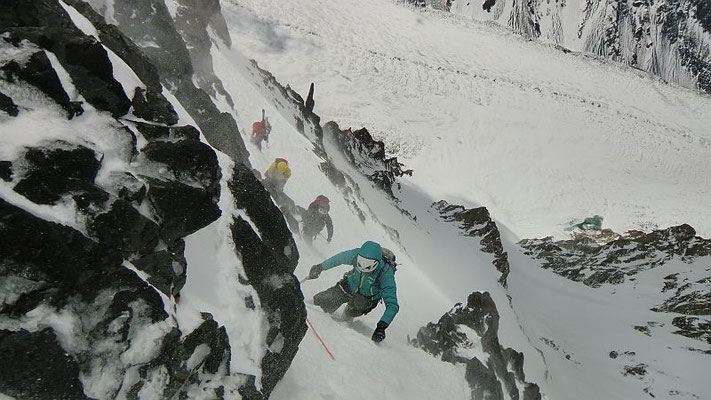 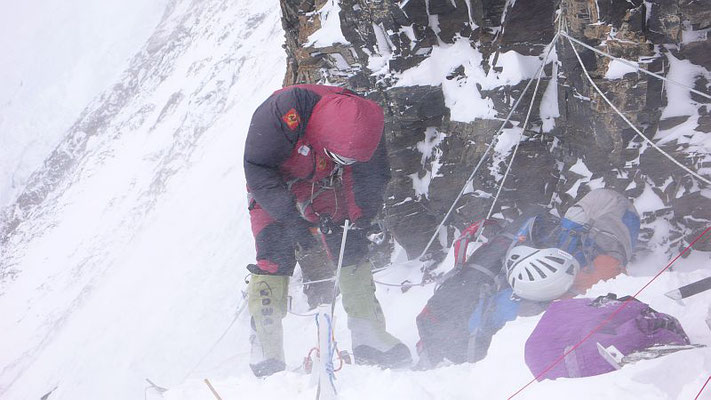 After a very stormy night, we left our camp at 7.15am the next day and headed up towards 7,500m. At this time we were not aware of the fact that the strong winds had destroyed the tents of the climbers, who had camped at CII on the Abruzzi Spur and that they had been descend to base camp.

However, at the Cesen Route the wind had done a good job and had blown off the snow, which meant that conditions were good up to 7,100m. Even though we had no views at all and it was very cold, we were still able to make good progress and were hopeful that the weather would improve.

Once we had reached our bivouac spot, which we had identified during our acclimatisation climb, we fixed our tent in a snow storm and tried to dry our wet downsuits, gloves, camera equipment etc. We were both excited to find out what the next day would bring. 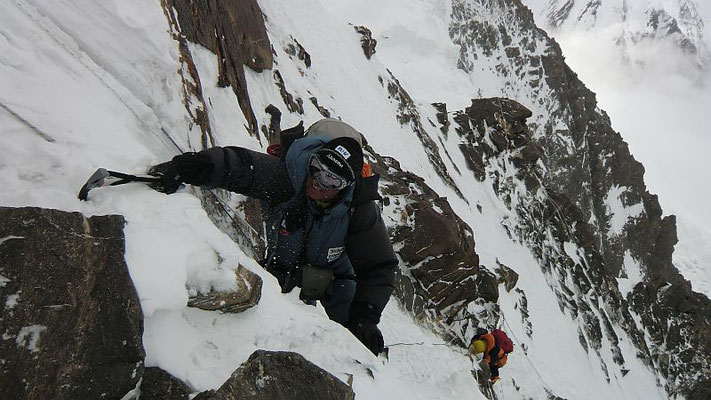 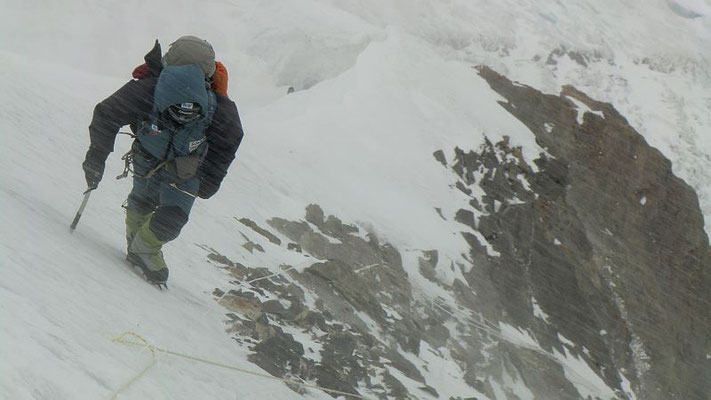 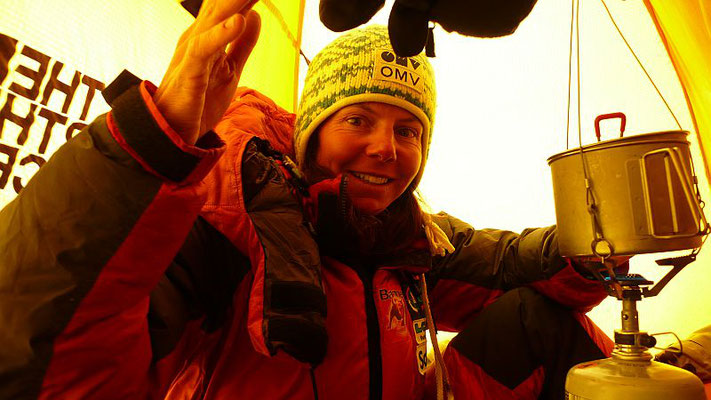 As I know the route pretty well by now, I was trying to imagine it, however, it looked different again this year. In the early morning hours the wind had died down and we continued our climb feeling full of energy and optimistic. Ralf and I had left before the others but we made a mistake, which was my fault. I was convinced that we had to keep to the left at about 7,400m, however, Ralf tended to go right.
Well, he was literally right and my error cost us about one hour, during which the other climbers had caught up with us. 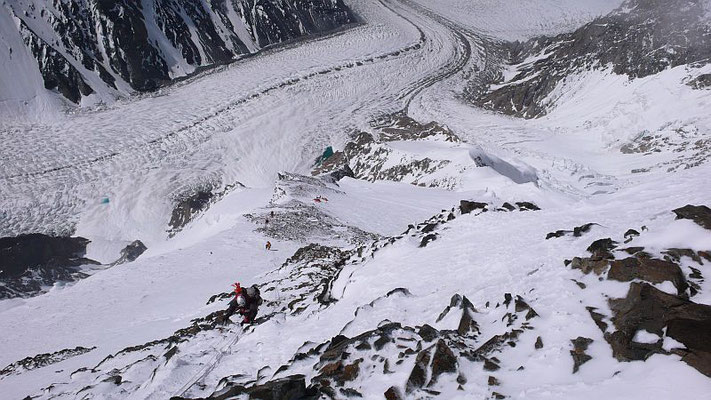 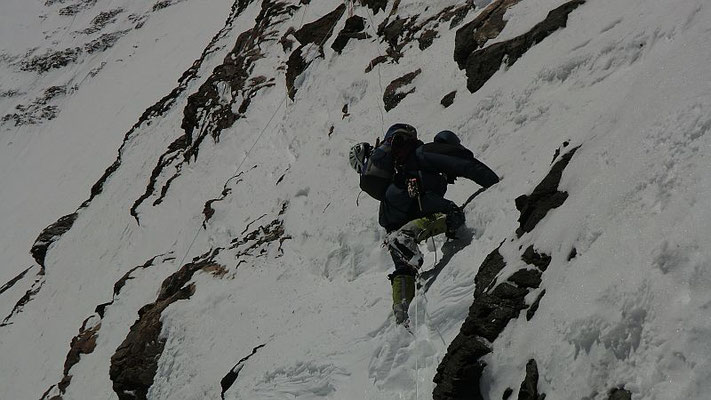 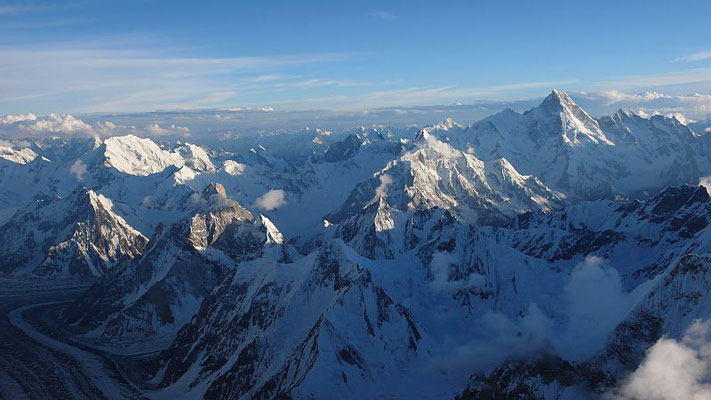 The route was very different this year: not a lot of ice, a lot of loose and crumbly rock, and from 7,500m onwards the accumulated snow drifts made it impossible to go quickly. It was a beautiful day though and, as Charly had predicted, very still. In the late afternoon, the surrounding mountains glimmered in an amazing and almost surreal red light. These moments of mystic, energy and vitality fulfill my life immensely. When we finally reached our bivouac spot, just underneath the shoulder, it was already late and we dug a small platform for our tent. Once in the tent we discussed whether we would be fit and rested enough to attempt the summit the same night. However, at around midnight this question became null and void as the storm came up again. As our bivouac spot was not very comfortable and our toes were very cold, we started our stove in the wee morning hours and commenced our descent at about 8:30 am. 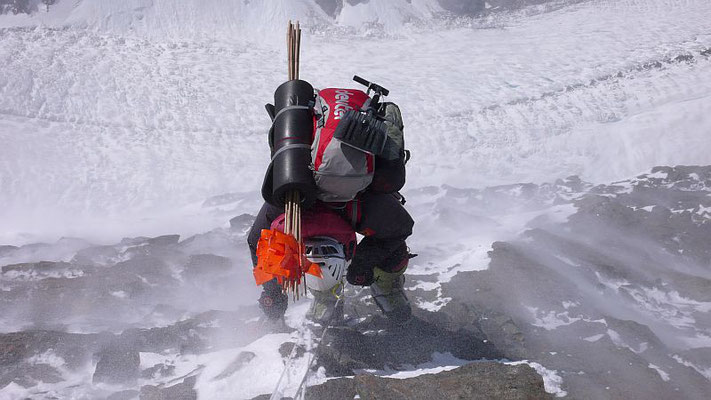 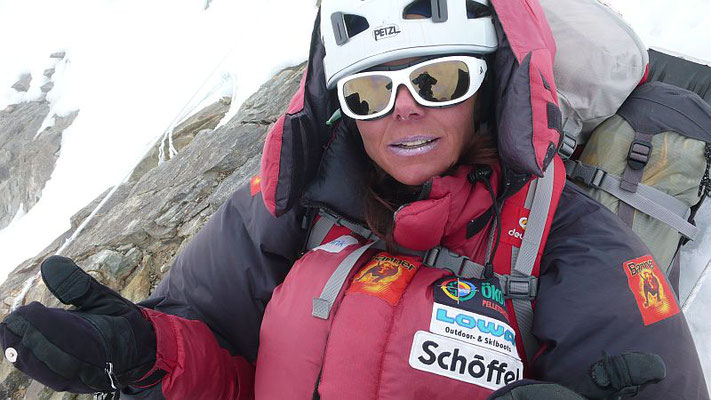 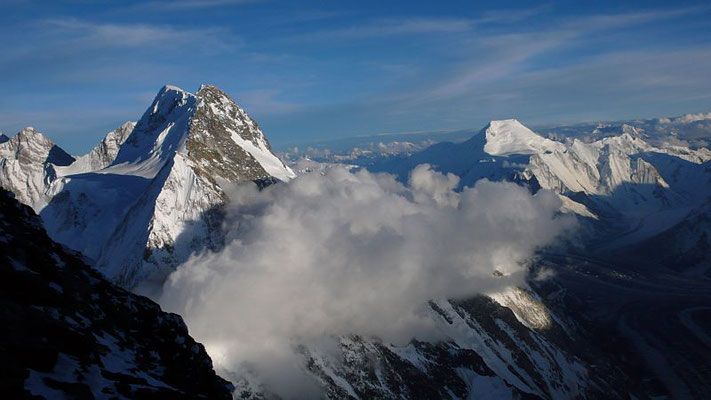 This was the fifth time that I had reached the shoulder or higher but when Ralf asked me whether I felt regret, I said ‘No’. The past is the past and I was already thinking about our next summit attempt. At the bottom, our kitchen boy Serbas was waiting for us with some apricot juice saying: “In Shallah, next time. At least you are back safe and sound.”

And yes, he was right. During the descent we encountered a lot of falling rock and below 6,500m there was a lot of snowmelt, so we were actually relieved when we arrived at 5pm at base camp – even though very tired. We were tucked up in our sleeping bags at 7pm and only woke up at 9am the next day! Three expeditions on the Abruzzi Spur had packed up and left base camp.

As far as we are concerned, we will now rest for a few days. We are still hopeful that we will get another chance and that we will be able to use it.

In the meantime, I would like to thank all of you for keeping your fingers crossed and we will be in touch again before we head up for the second time.

We are sending you warm regards from a very misty and foggy base camp.