At midday today, I was finally able to talk to Gerlinde. She said that the wind had still been very strong and that Vassiliy, Maxut, Darek and herself had just reached a point above Camp III. At about two-thirds up the very steep bit directly on the pillar after Camp III, they had been wading through huge amounts of fresh snow and snowdrifts. They all sounded well, however, they were quite exhausted due to the strong winds. After the four of them had spent a very long and tiring night in a small tent on the rocky shoulder between Camp I and II, they were able to dry stuff like gloves and downsuits (not their inner boots though). They are hoping to reach Camp III not too late in the afternoon in order to get ready for the long and exhausting trip to Camp IV tomorrow. I am hoping to get more news at about 6pm our time.

Tommy and I descended from Camp I to base camp yesterday. Assessing the danger of snow or slab avalanches is very subjective. New snow is only part of the deal. Snowdrifts, gradient and shape of the slope,nature of the soil and the amount of snow that had fallen during the previous days and some other factors should be considered when assess avalanche danger. However, in places without avalanche warnings, there are only two things: your assessment and your gut feeling – and both are different for everyone, depending on experience. I was no longer happy up there and my gut feeling said “No” – and I knew that I had to go down.

Gerlinde, Vassili, Maxut and Darek assessed the situation a little bit differently – and it seems that their gut feeling was also right. I hope that they will make it and every single metre of progress in these difficult conditions makes me very happy. However, I am still very worried.

After having broken into a few crevasse (due to the huge amount of snow and poor visibility, the crevasses were very difficult to see), Tommy and I reached our base camp, and we were quite surprised about what we saw: while we had been gone, five huge rocks (1.2 to 2 metres diametre each) had hit our base camp. It seemed as if they had been loosened by the strong rain from far above base camp and had literally ‘skipped into our camp. Our kitchen tent was a complete write-off as the biggest rock had completely flattened the stone kitchen. It was lucky that we had asked our cook to go down to the lower altitudes while we were on the mountain. I don’t even want to think about what would have happened, had he been there. Maxut’s and Vassily’s tents were also completely destroyed whereas Gerlinde and my tent remained unharmed, which was probably due to the fact that it had been pitched in a small ditch. A rock with a diametre of about 1.5m must have fallen right next to it, however, due to the ditch it must have bounced back. We were so lucky not to have been there.

While Tommy descended to base camp to get Abdhul and the camel herders, I stayed here to keep in touch with Gerlinde, Darek, Maxut and Vassiliy. Gerlinde’s battery power permitting, I will do my best to report about their progress on the mountain in the next few days.
Let’s keep our fingers crossed – after weeks of very hard work they really deserve success this time!

Best regards from our slightly damaged base camp

Gerlinde, Maxut, Vassiliy and Darek have arrived safely at Camp III. They had been struggling in the strong winds during the ascent, however, it had died down at about 5.30pm. They are all well and they were able to dry their gear in the afternoon. The summit attempt is now more likely to be on Monday. 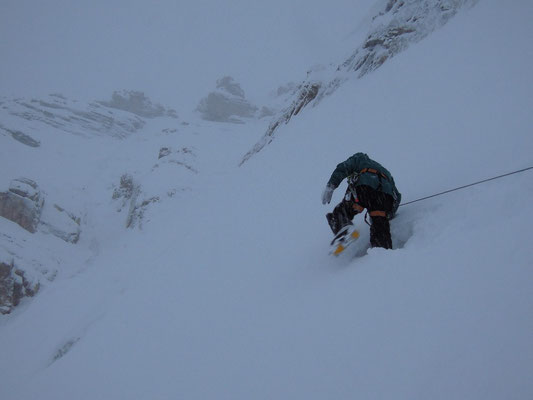 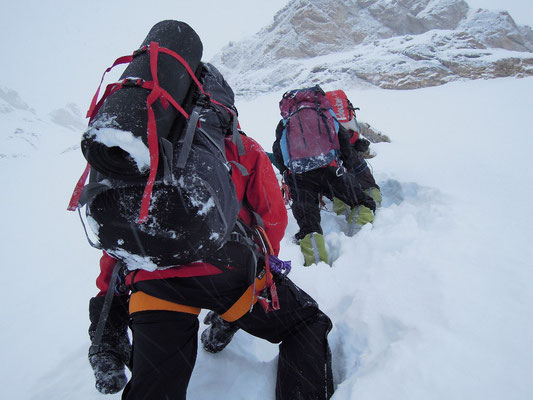 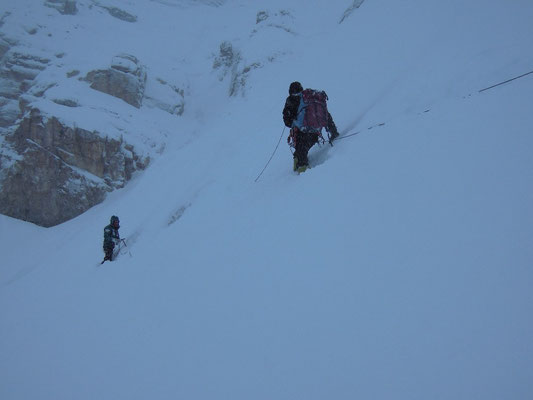 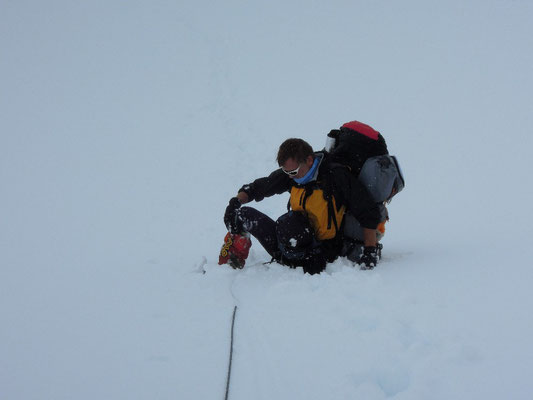 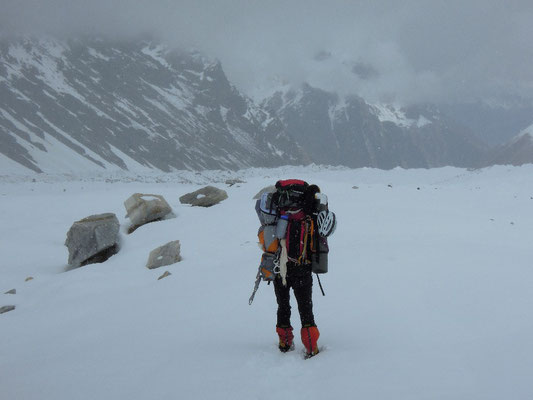 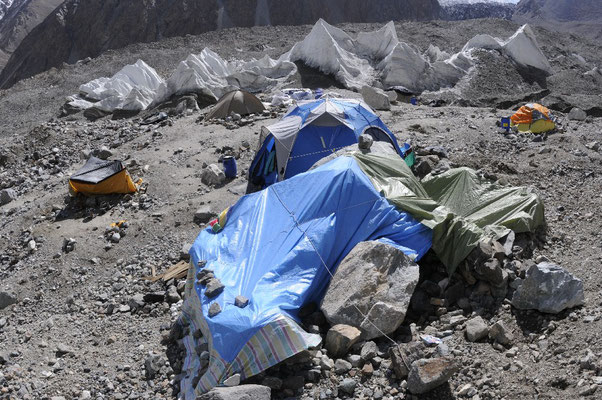 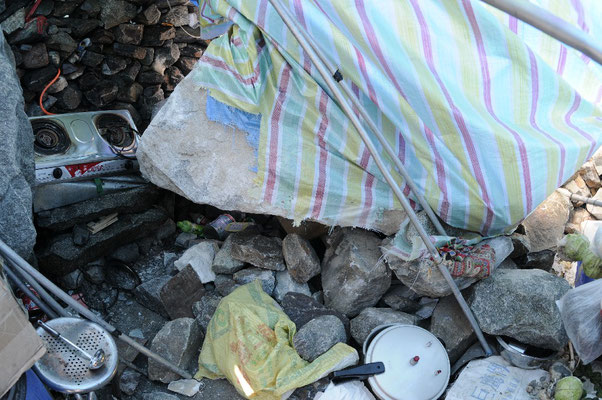 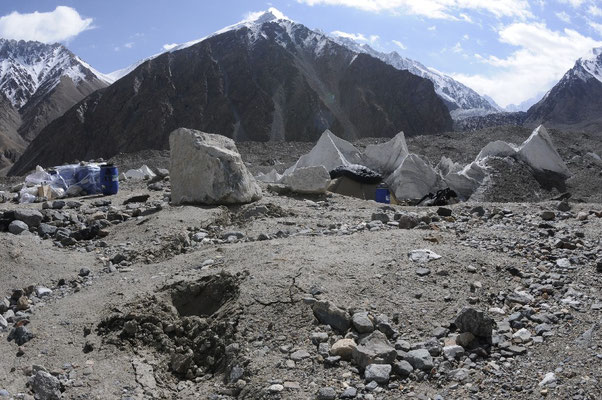 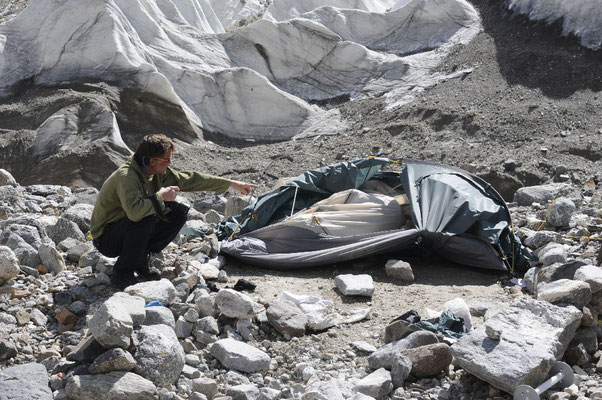 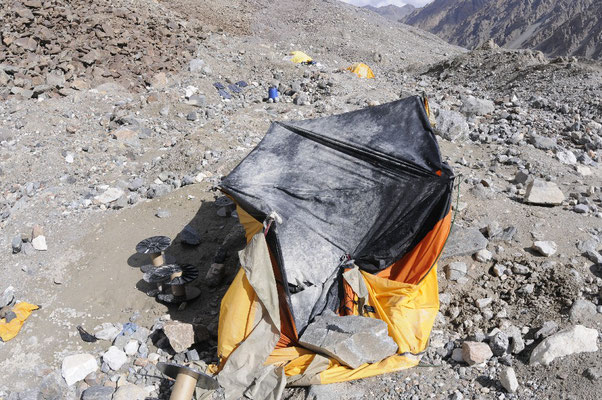 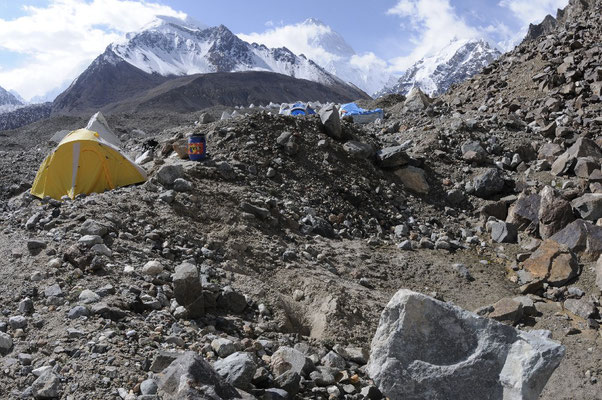