Dear Friends
Finally we are able to send an update from our base camp, which lies at an altitude of 3,900m and a lot has happened since our arrival in Bishkek. We met Darek during our layover in Moscow and we reunited with Maxut and Vassily at breakfast in our hotel Bishkek, where we had the chance to freshen up a bit. As we all had our Chinese visas we were able to continue to Tash Rabat near the Chinese border, where we found shelter in a hut at an altitude of about 3,000m. We stayed with Juri and his wife, a lovely Kyrgyz couple, who usually come here during the summer to provide accommodation for travellers. The next morning we even got the chance to taste fermented horse milk from a neighbouring farm – you really have to get used to the taste, however, it is supposed to be very healthy!!

After a few long border controls we reached Kashgar in the Chinese province of Xinjiang. I almost did not recognise this town. In 1995, after our expedition to Muztagh Ata, the town had a population of about 200,000 and was more or less manageable. However, in the meantime Kashgar has grown into a city of four million people!!! We met Chip (Sandford Brown, a National Geographic journalist, who is accompanying us to base camp) and Tommy in Kashgar. After our arrival, we discussed the last details with Keyoum, our local tour operator, before he took us to a local restaurant for dinner. We started our meal with a bowl of yoghurt and a cup of saffron tea just like the Uigurs themselves. Just before we headed of to Yecheng towards K2, we visited the Sunday market for our last minute shopping. It is a gigantic market, where you can get everything under the sun.
Uncountable bakeries sell Naan bread and you can get any fruit, vegetable or other foodstuff at the other stalls.

>From Kashgar we continued in jeeps – something we were surprised about
as the road to Yecheng was supposed to be in good condition. However, we found out very quickly why we were using jeeps. A dirt road, which initially led along the Taklamakan Desert, wound its way up to a 3,500m pass, where we were faced with our first checkpoint. The road continued over sand and rocks to a 5,000m pass. This particular road is only open for three days at a time; the rest of the time numerous construction workers work on widening and sealing the road in very harsh and dusty conditions.

We had to stay an unexpected night in Mazar as we had lost a lot of time due to three punctures on our tyres and the fact that the truck, which was carrying our equipment and food, had problems with the gearbox! It was actually a blessing in disguise as we were able to spend a full day in Mazar at 3,700m, which was quite good for our acclimatisation. In Mazar we hired another truck and continued to Illik the same evening. During our last and very time-consuming military checkpoint, the soldiers, once again, inspected our luggage very diligently.

In Illik, a village of about 250 people, we went directly to a Kyrgyz family, whose father of five is the mayor as well as the camel herder of the village. The family was extremely hospitable and offered us their common room to sleep. The people in this area are pretty shy and it is obvious that not many tourists come through here.
Illik is a Nomads’ village, where people only live in mud houses during the winter. Every family owns a few camels, which gathered in front of Danier, the mayor’s house the next morning.

Splitting the loads between the camels was a very time-consuming but interesting affair. With 35 camels, eight camel herders, who were each riding a donkey, we trekked to our first camp at 3,450m.

The camels walked rhythmically without stopping at all. Our next stage took us just below the 4,800m high Aghil Pass, where we pitched our tents at Danier’s plot of land at 4,450m. Danier’s wife had already been there for about one week and she welcomed us with a bowl of fresh ‘Airan’ (yoghurt). This lovely woman will probably stay up there for two months to tend to the sheep.

The following night saw a bit of snow, however, this did not seem to be a problem for crossing the Aghil Pass. After our descent, which took a few hours, we finally reached the Shaksgam Valley – a place Ralf and I had dreamed about for many years. We were able to enjoy a significant view of the wide riverbed, which was seamed by the Shaksgam Dolomites to the right and by very steep eroded rock walls to the left. The river meanders back and forth and every once in a while we had to use the camels to cross it. It was the first time that Ralf, Darek and I were riding a camel. It is very important to follow the rhythm of the animal and it is actually the only way to ride these camels. However, we were all happy to get back to our own feet after such a river crossing.

The approach march in such beautiful and very remote nature was extremely energizing for all of us. We are the only expedition on this side of the mountain and we really appreciate this remoteness. Shortly after our arrival at base camp we were able to catch a glimpse of the upper section of K2, which is very impressive. It is impossible to see the whole mountain from base camp and we are already wondering what the peak has in store for us this time. The mountain seems very different from this side – simply new.
Our base camp does not really seem like a base camp. We pitched our tents on a green meadow covered in horse dung with a small clean creek running along it. And we can see all the way into the Shaksgam Valley.

We will only stay here for a short while. On Monday, Maxut, Vassily, myself and the camel herders went to the so-called Italy Base Camp.
Our advanced base camp is still a long way away and it is very unlikely that the donkeys will make the 20 kilometres from base camp to advanced base camp. Ralf and Darek ascended to the Italy Base Camp on Tuesday morning and came back the same day.

Tomorrow (Wednesday) we are planning on spending a night up there and then carry our gear to our ABC, which will probably take another five hours. As soon as we have set up our ABC we will be in touch again. 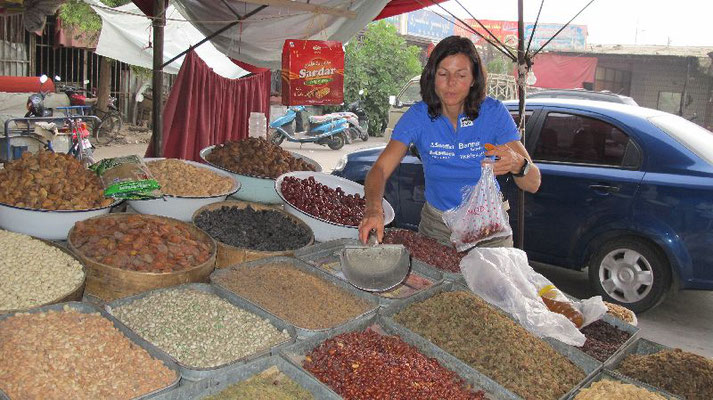 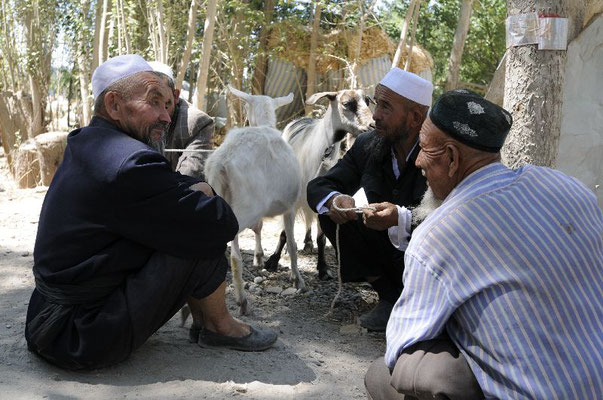 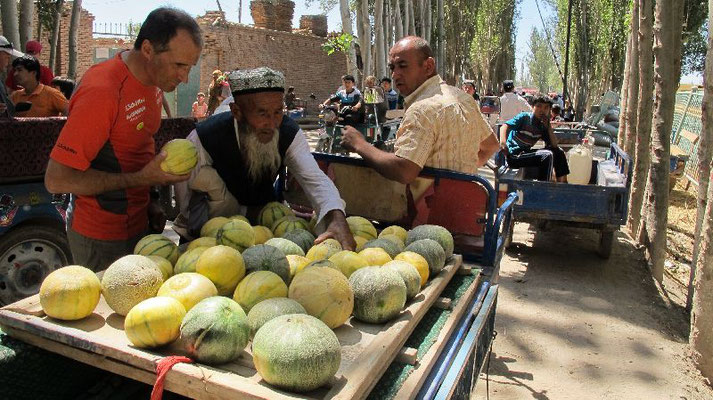 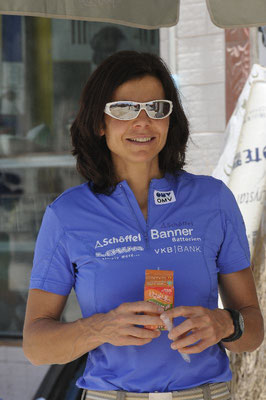 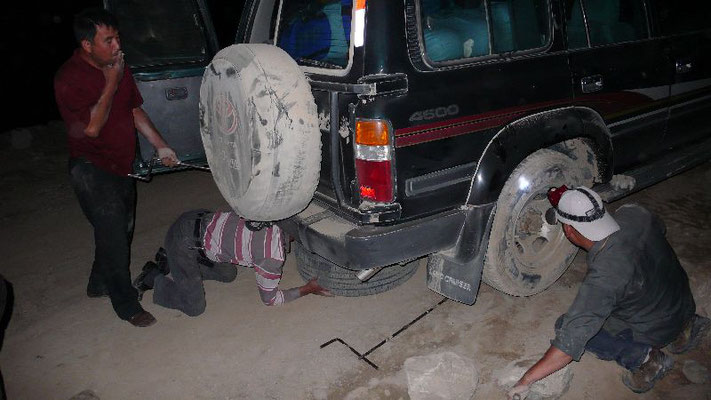 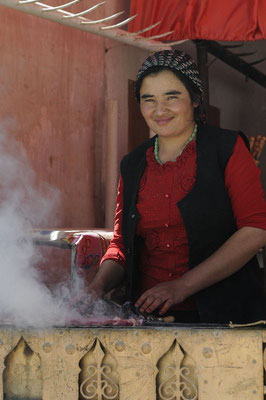 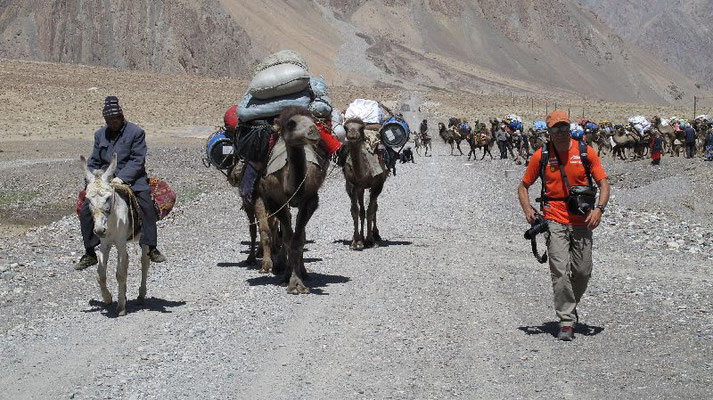 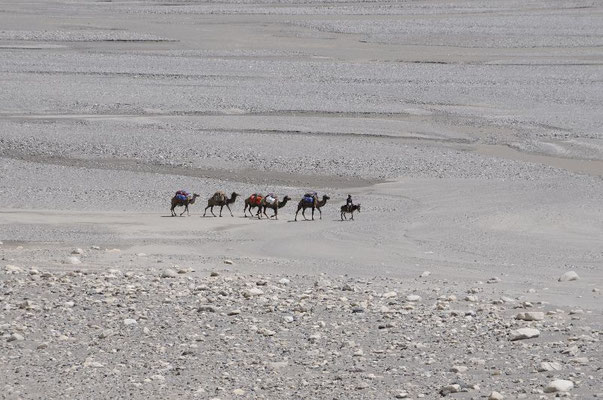 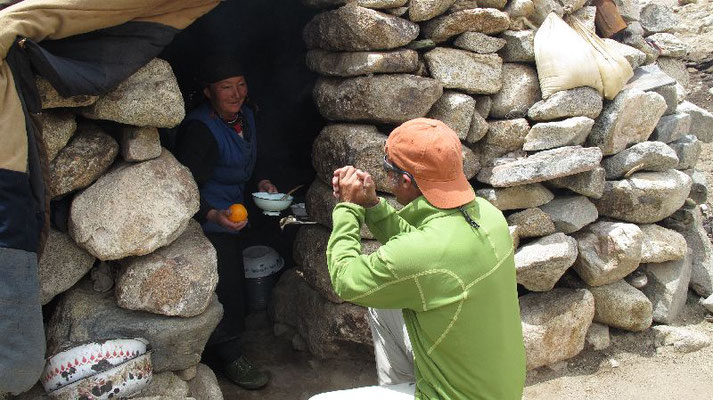 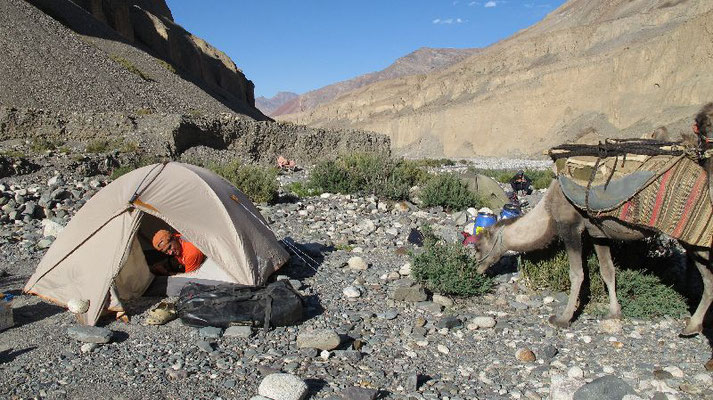 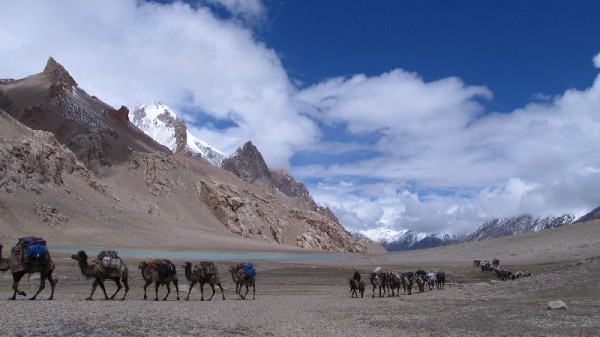 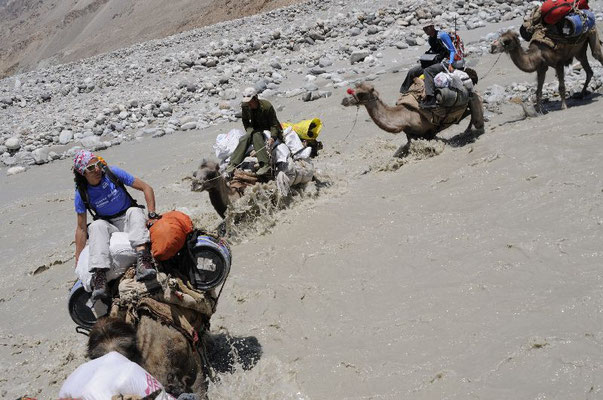 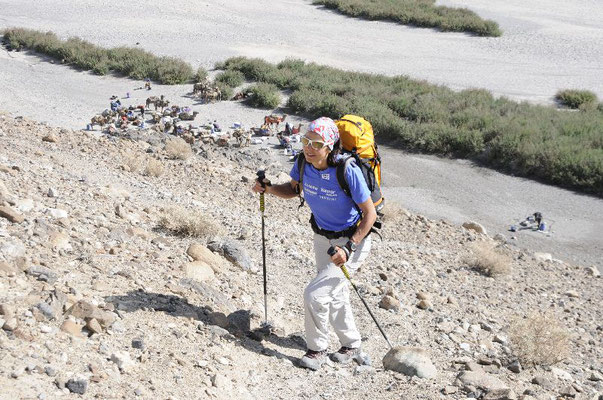 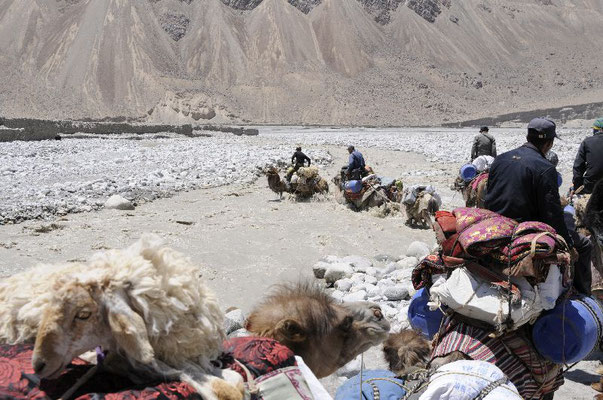