Already one week has gone by since our last newsletter and there have been days of great teamwork and a lot of progress on the mountain.

After 3 days of rest and bad weather, we went back up to Camp I on 12 July. At our deposit camp, we packed our backpacks again with some fixing gear, like clamps, ice screws, snow flukes and fixing ropes. We were going to fix one of the steeper parts of the north pillar route. Already at Camp I we were knee-deep in snow, but due to the intensity of the sun during the day, the snow had settled  somewhat. As soon as we had freed our tents from the snow, we had a fortifying meal of garlic fried potatoes that our cook Abdul had prepared for us. We discussed the tactics for the following day, which, however, would not go according to plan.

We struggled upwards through waist-deep snow at times, and made only very slow progress. The climb was energy-sapping and in the upper, clearly steeper part of the snow ridge there was a danger of avalanches. We decided to break off the ascent and start again the following day from the same point, once the snow had hopefully settled some more. Max, Vassiliy, Darek and Tommy went back to Camp I. Ralf and I dug out a small platform for our tent at a safe location on the ridge and spent a fabulous and wonderful afternoon at 5950 metres. Just as we had hoped, numerous avalanches had come off the ridge, so we were able to continue climbing the next morning.

At 6 am, when we were just up on the ridge to do some more tracking, the morning sun came out and was so powerful and radiant and it made us both feel so grateful for the privilege of being out in this incredible wild nature. After the challenging rock passages, we had a short rest and could see the others already arriving. Today we wanted to reach the spot where we were planning to build Camp II. As we worked our way up, metre by metre, time was flying by. Maxut and Vassiliy came after us with more fixing ropes. The route is very steep along its entire course and, as we will have to go up and down several more times, we wanted to make it as safe as possible with the fixing ropes. To be honest, we did not expect the route to be as steep and challenging as it is.

Vassily, who is known for his exceptionally strong morale went first: a sheer wall of ice, partly rocky, approximately 150 meters high, covered by a layer of granular snow, lay ahead of us.  Ralf was drilling some Abalakov threads as safety points for the intermediate belay and belay stations, while Gerlinde was belaying Vassiliy. After climbing another very tricky and steep cliff and many hours of full concentration, we reached a point of exactly 6600 meters at 8:30 pm where we set up our small tent. Vassiliy abseiled down to 6250m, where Maxut had prepared everything for them to stay for the night. Ralf and I wanted to spend the night on the first, somewhat flatter ledge of the pillar on the site we had chosen for Camp II. Darek and Tommy, who were who were in charge of bringing up additional supplies, were sleeping on the snow ridge where we had spent the previous night. It was another day of perfect teamwork.

We were in touch via radio. Vassiliy had arrived safely where Maxut had been waiting for him, and Darek and Tommy were also feeling well. After a 14.5-hour climb, it took a lot of effort to melt and drink the necessary amount of liquid. It is almost impossible to describe the atmosphere that evening. The entire horizon seemed aglow and once more we were filled with a sense of deep joy. Finally, an hour before midnight, and feeling very, very tired, we crawled into our sleeping bags.

At 6 am, the alarm on Ralf’s watch, which he always keeps under his mattress at night, went off. We had arranged radio contact with the others. Darek and Tommy took some more supplies up to where Maxut and Vassiliy were, while Ralf and I set up an avalanche-safe deposit camp at 6600m. After 2 hours of abseiling, we all met down at Camp I and started heading back to our advanced base camp in heavy snowfall, which had just started. Our friend and meteorologist Charly (Dr. Karl Gabl in Innsbruck / Austria) had once again been proven right in his weather forecast. Two days of bad weather shouldn’t produce too much fresh snow, so we will hopefully enjoy better conditions when we start our next climb.

That’s it for today; we send you warm regards from a snow flurry at our ABC, 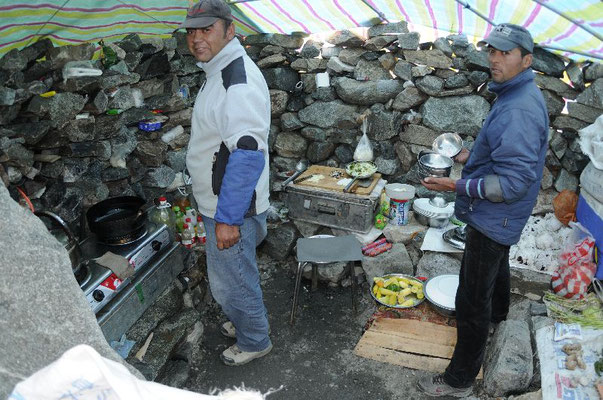 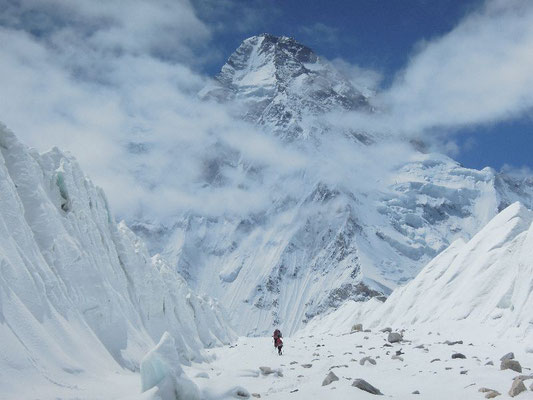 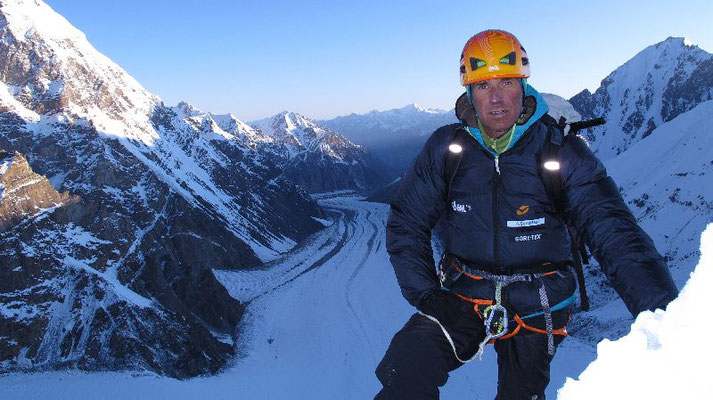 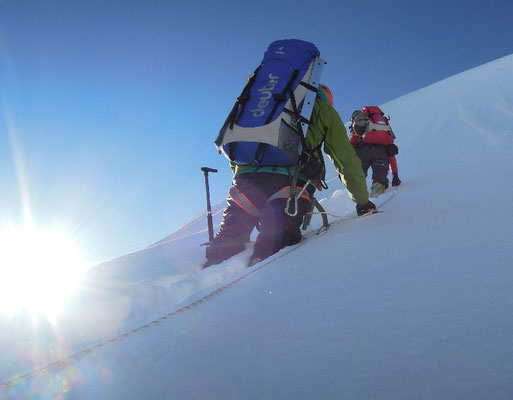 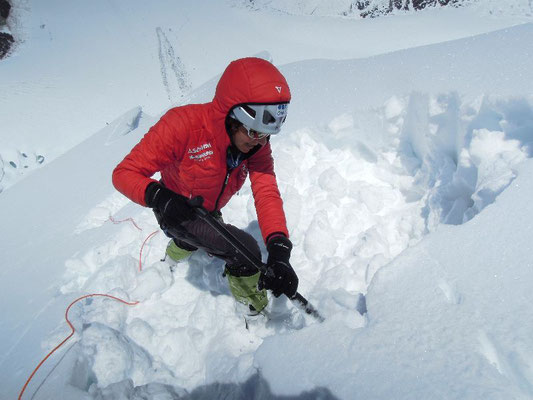 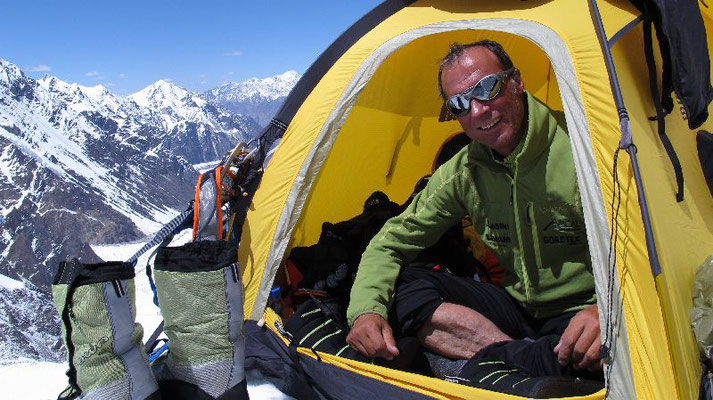 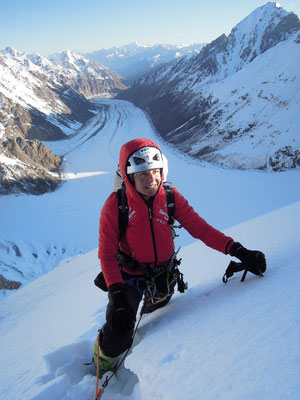 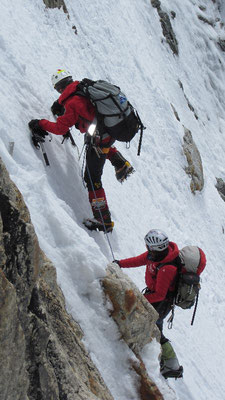 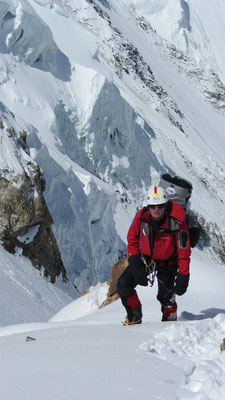 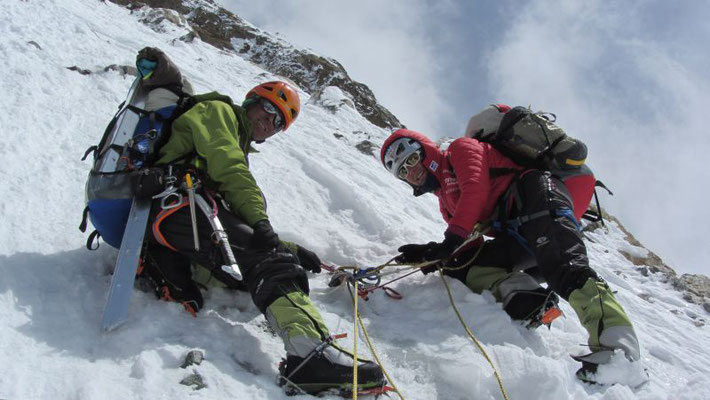 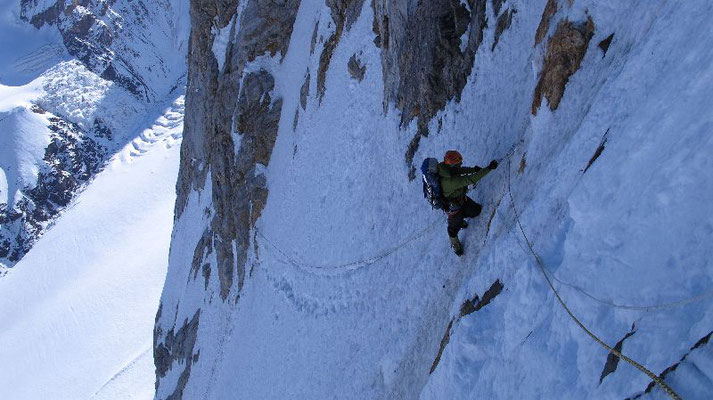 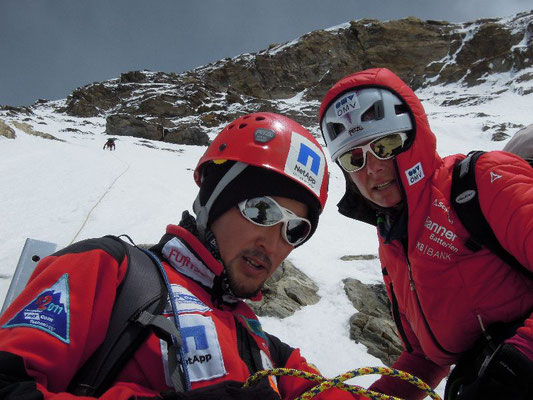 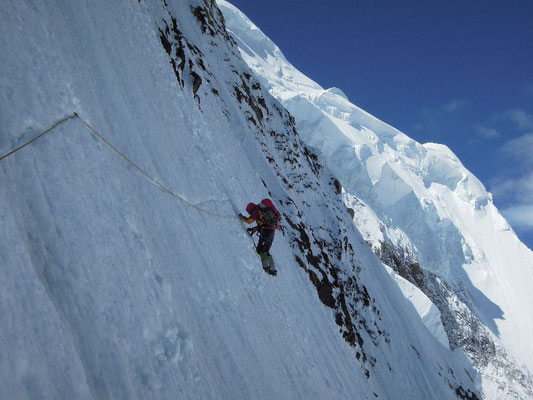 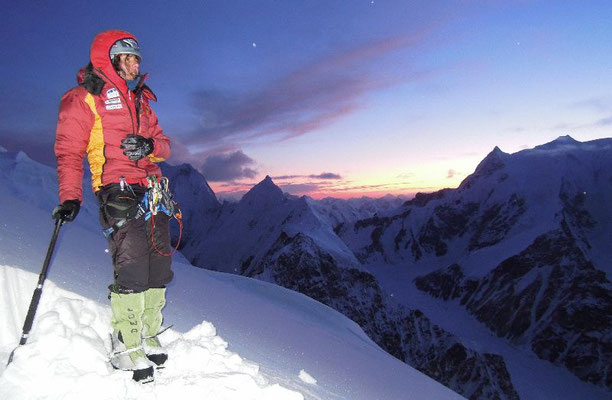