We spent another five days and four nights at high camps on the mountain. Last night we came back to our advanced base camp, tired but also very content. We left from our advanced base camp on 19th July after a forecast of at least six days of good weather. Bad weather brought continuous snowfall and heavy fog from our deposit camp onwards, which left us doubting our plans on arrival at Camp I. The climb across the glacier — with lots of crevasses and several falls (no injuries) — didn’t make it any easier for us. Over night the sky cleared and so we started on 20th July at 5:30 am. The entrance of the couloir, through which an avalanche had gone down the night before, had good ice conditions. On the ice ridge we were in deep snow again — in some parts with a crust on it — which made tracking very exhausting. As we had expected these kind of conditions, we decided to only climb up to the shoulder of rock that day. The others had already set up two platforms for their tents on a very narrow space. While the other four took the ropes up a bit further during the afternoon, the two of us left our ropes and abseiled down to Camp I.

The following day, Ralf and I went up to Camp II with more ropes. There had been more snowfall and wind overnight, leading to deep tracking once again.
After 11 hours we arrived at 6600 metres at the location where we would set up Camp II and where we had left our personal gear a week earlier. We were able to bring along ropes for the route up to Camp III while the others had transported their personal gear up from the shoulder of rock. Now we were united as a team once again.
The weather was very unsettled, locally on the north site of K2, due to the south west wind. The recurring snow fall, and even more so, the strong wind, made it difficult for us.

Nevertheless, Vassily, Ralf and I wanted to set out the next morning to start on the route towards Camp III. Maxut, Darek and Tommy abseiled approximately 300 meters. The ropes, which had been left the day before, had to be taken up as we kept on going up. We worked our way up along the ridge with very poor visibility. Occasionally the weather cleared up, but squalls kept filling up our tracks within minutes with windblown snow. On the more rocky terrain we advanced somewhat faster. At about 7000 meters, Maxut, Ralf and Darek deposited the ropes we had brought with us. Vassily and I fixed the route to where Camp III was going to be, at around 7250 meters.

At 5 pm, feeling cold but very content, we reached Camp II where Ralf greeted  Vassiliy and me with some hot drinks.
We had achieved our next milestone, reaching the location for Camp III.
For a moment we thought about climbing up to Camp III again the next morning in order to sleep there, and then work on the route to Camp IV (the camp before the summit). But the wind and snow fall during the night gave us pause, and we started our descent the next morning when it cleared off, very content with what we had achieved so far.

Shortly before we reached Camp I, an avalanche came down to the west of our route which fortunately didn’t threaten our Camp I and the tracks going up there. Walking across the K2 glacier we discovered a beautifully located small lake between the ice towers, which made us think of deep-water-soloing with ice equipment and a bathing suite. If only the water had not been just above freezing.
One hour later we were sitting in our team tent enjoying the noodle soup which Abdul, our Uigurian cook, had prepared for us. After having been on expedition for almost 40 days, the team is in very good spirits.

Charly Gabl has predicted heavy storms for the next few days and we will use these days to relax as best we can with lots of food and reading.

So much for today. Sending you warm regards, 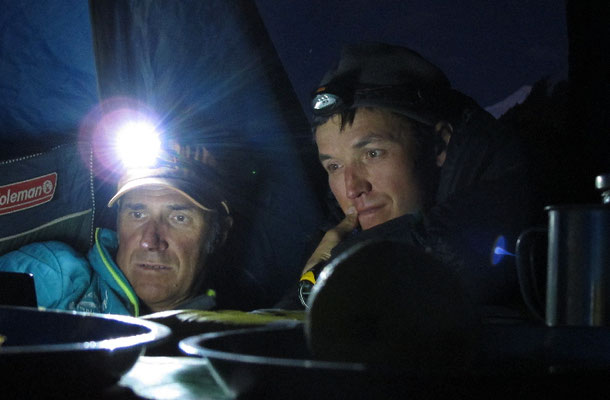 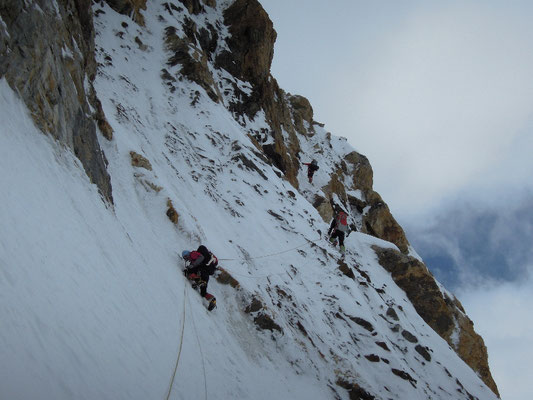 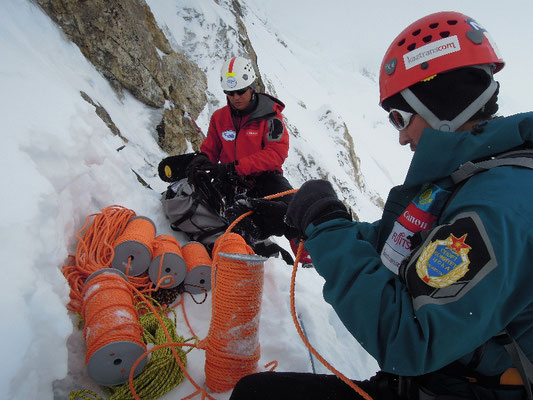 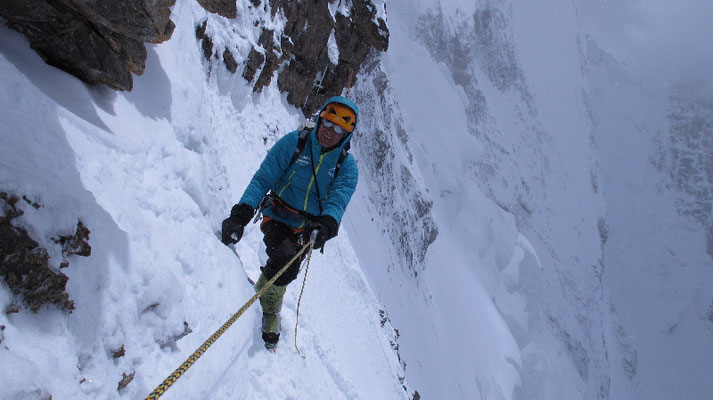 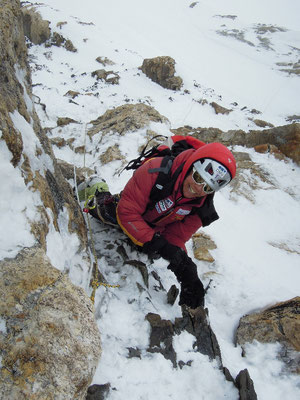 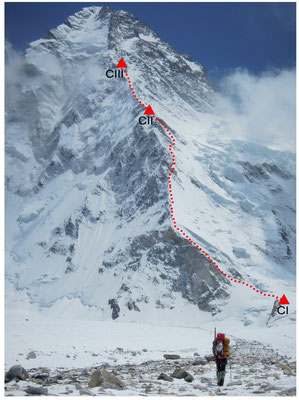 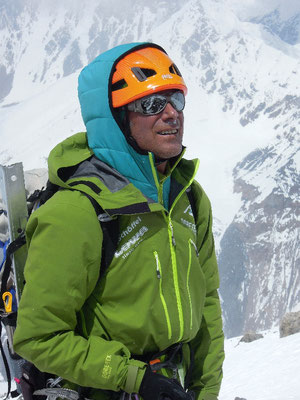 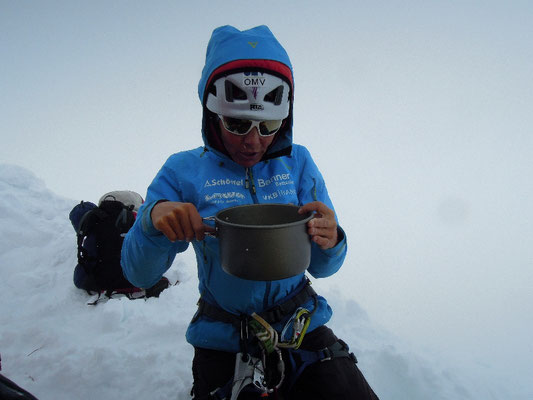 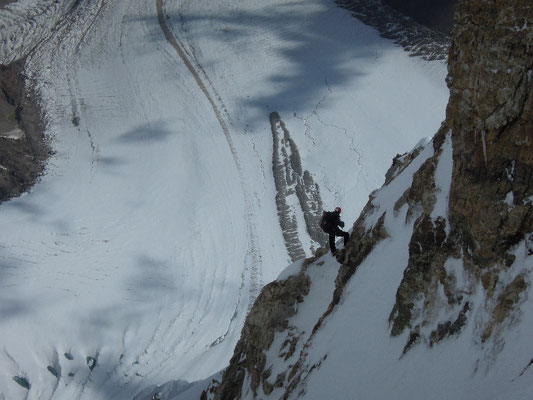 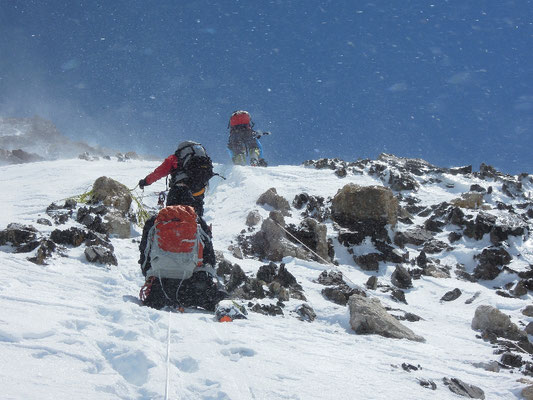 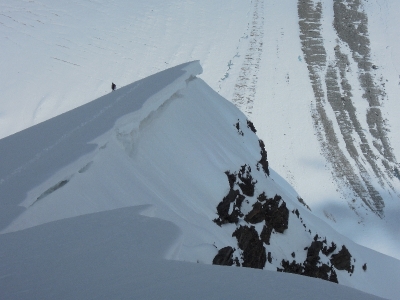 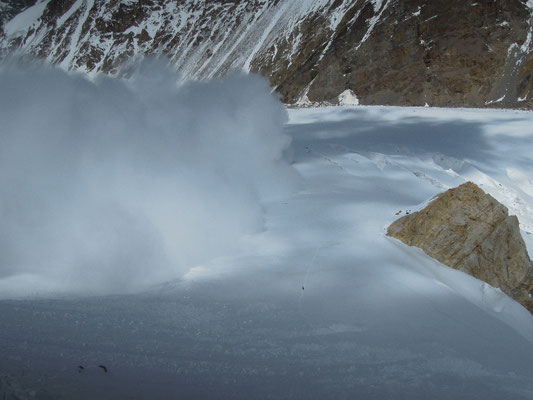 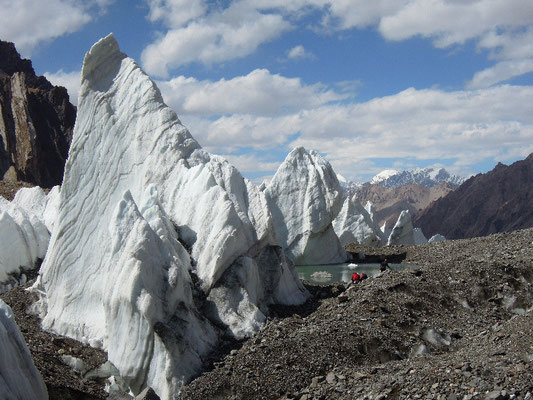